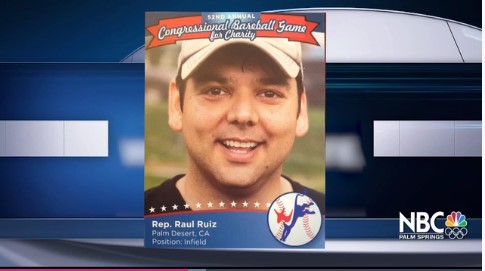 Congressman Raul Ruiz is participating in the Congressional baseball game for charity, which has been going on since 1909.

“You know, baseball, kept me out of trouble as a young boy and really gave me a lot of life lessons. It’s so surreal that a kid from Coachella who grew up initially in a trailer park is here representing our district in this great country of ours.”

Congressman Ruiz is repping, a Cathedral City High School baseball jersey, showcasing the valley at the game which is taking place at Nationals Park where the Washington Nationals play.

“For me, it’s a source of pride to be able to wear a jersey of a local high school.”

Athletic Director Travis Smith agrees that it gives the city of Cathedral City a sense of pride.

“That’s exciting, you know, it’s anytime that we can get our logo out there for the world to see and our colors exciting to see that on national television fun for everybody here in the valley to notice that.”

This annual event benefits various youth programs in Washington D.C. and provides an opportunity for bipartisan camaraderie and fun.

“It’s so much fun to go out and play ball with Democrats and Republicans for a moment of unity, to break through this partisanship.”

Our representative is also a baller, he was selected to hit leadoff and start at second base!

“You know they just hit me some ground balls and in the plate saw what I can do and said ‘you’re starting second baseman and our leadoff hitter.”

Like every athlete, Congressman Ruiz has his own pregame ritual.

“I do a lot of visualization. I visualize me hitting the ball I visualize fielding grounders, tried to take a brief nap power nap beforehand, I eat a power bar, I go out there and I get in the zone and I listen to good music. Do you know that Eight Mile song from Eminem? That one yeah!”

This was the most entertaining amateur baseball game to ever witness, these members of Congress were both terrible and amazing at baseball. Each inning, the Democrats and the Republicans took turns taking the lead. In the end, it was the Republicans who held onto the lead, 13-12.

Representative Raul Ruiz did a decent job at second base, with one great catch and he was HBP and stole a base, defiantly a certified base-BALLER!

Representative Greg Steube from Florida became the first congressional baseball player in over 40 years to hit an over the fence home run, 336 feet over Nationals Park. Steube also threw 120 pitches for the Republicans.

Greg Steube is the first congressional baseball player in at least a decade to hit an over-the-fence home run!! 336 feet at Nationals Park pic.twitter.com/nhAd95ktmo