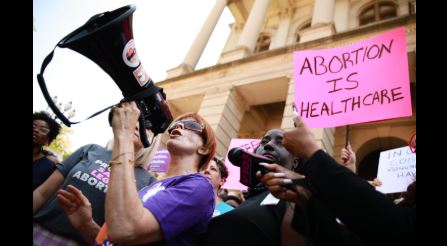 “We can’t go back, this has been a right since 1973,” said Brenda Olivares, a resident of Palm Desert. “We shouldn’t be going backwards in time. We should be going forward.”

As federal judges prepare to hear arguments over state abortion laws, thousands across the country are rallying cries for women’s reproductive rights. The battle for reproductive rights reached Riverside County, with many gathering in solidarity with those affected by the restrictive Texas abortion law. Dozens of Coachella Valley residents rallied in Beaumont on Saturday.

“Today, we’re protesting specifically the Texas bill that bans abortion past six weeks,” Kathleen Ballew, the Women’s March event organizer. “It sets a precedent that we’re not going to accept.”

What is considered the nation’s most restrictive bans on abortion became a law in Texas. Under Senate Bill 8, the state bans abortions after six weeks, with no exceptions for rape or incest. Anyone who performs or aids a patient with an abortion can also be sued.

“It’s horrible. To me, it’s just people trying to control the women’s bodies,” said Olivares. “We have a place in society and we have a right to our own bodies.”

One step forward, and two steps back- that’s how many are describing the new law, implemented nearly 50 years after Roe V. Wade, the landmark Supreme Court decision that protects a woman’s right to have an abortion.

“That was what? 40, 50 years ago and I can’t believe we’re out here trying to do the same thing again,” said Stephanie Austin, a resident of Palm Springs. “I find it really somewhat sad to think that we are fighting for our own rights again after all this time.”

“It’s so important for women to have access to abortion, and it’s healthcare, and it should be left up to a woman and her doctor, and people should not be getting involved in it,” said Olivares. “Men don’t have any restrictions on their bodies.”

People shouted and drivers passing by honked their horns in support. At the same time, protestors say many people were not in favor of their movement.

“The support is amazing,” said Tanya Tassi, a resident of Cathedral City. “There’s people who disagree and that’s their right to disagree, and I’m okay with that as long as it’s respectful.”

They said the fight for reproductive rights is a battle that rages on.

“We’re not ready to lay down. We never have been and we won’t do it.” said Ballew. “Our voices need to be heard and people are ready to hear them.”