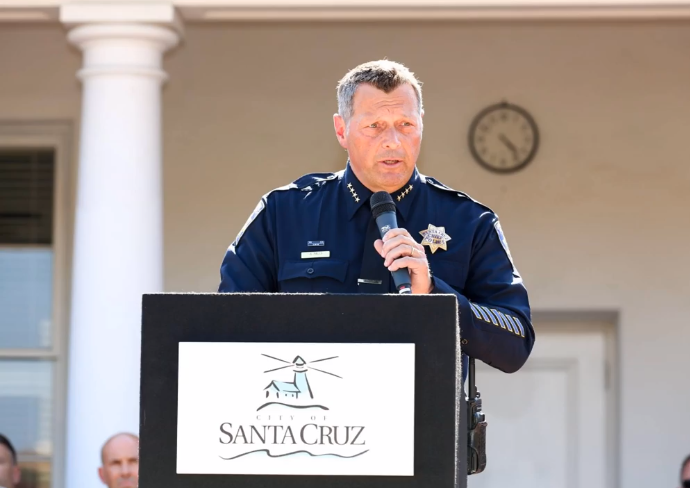 The former Chief of Police of Santa Cruz, California, a City of 63,000 residents, will be the next leader of the Palm Springs Police Department.

Andrew Mills has led the Santa Cruz Police Department since 2017. Prior to Santa Cruz, Mills served four years as Chief of Police in Eureka, California. He began his career in 1983 as a patrol officer with the San Diego Police Department and worked his way up to commanding officer of gang investigations and criminal intelligence/counter terrorism, rising to the rank of Police Captain and Commanding Officer in 2011, overseeing the San Diego Police Department’s Western and Eastern divisions. Chief Mills will begin his new position in Palm Springs in early November.

In Santa Cruz, Mills was hired as a change agent to help move the department toward a culture of community policing and problem solving, while bringing greater transparency and community collaboration.

The selection process started with review of resumes, a significant screening of more than 50 applicants and two surveys that queried residents and Police Department employees about attributes they were looking for in the next Chief of Police.

The process concluded with four separate panels conducted by City Staff and Ralph Anderson and Associates that were comprised of several Chiefs of Police, sworn and unsworn members of the Palm Springs Police Department, an executive department head panel, and a panel comprised of members of the community selected by a Councilmember in each of the City’s five districts, plus other selected stakeholders. The City Council Selection Committee included Mayor pro tem Lisa Middleton, Councilmembers Geoff Kors and Dennis Woods.

A graduate of Indiana Wesleyan University, Mills also graduated from the FBI National Academy Session 250, Quantico Virginia and California P.O.S.T Management School. Appointed by former Gov. Jerry Brown to serve on the Board of State and Community Corrections, Mills also serves as Executive Chair of the California Violence Prevention Grant and on the Board of the Herman Goldstein Award for Excellence in Problem Oriented Policing. He is also a member of the Major Cities Chiefs Intelligence Commanders Group.

“I am very excited to see Chief Mills join our team. We have had an extensive process where the candidates were tested on their values, knowledge, skills and abilities with a broad cross-section of stakeholders serving as evaluators,” said City Manager Justin Clifton. “Chief Mills was clearly the top performer in the process. I think he will be able to integrate with our team and community seamlessly. He brings a wealth of experience and leadership that, with help from the rest of our team, can take us to the next level.”

“The Palm Springs Police Department has a long-standing tradition of inclusive community policing and building important neighborhood and stakeholder relationships,” said Chief Mills. I am honored to be chosen to serve as the next Palm Springs Police Chief, and I look forward to working with our officers, the community, City Manager and Council to continue providing an exceptional level of public safety service to the Palm Springs community.”

Mills will take the spot of former Palm Springs Police Chief Bryan Reyes after he announced his retirement back in May of this year.