The “Invisible” Tennis Assistants at the BNP Paribas Open 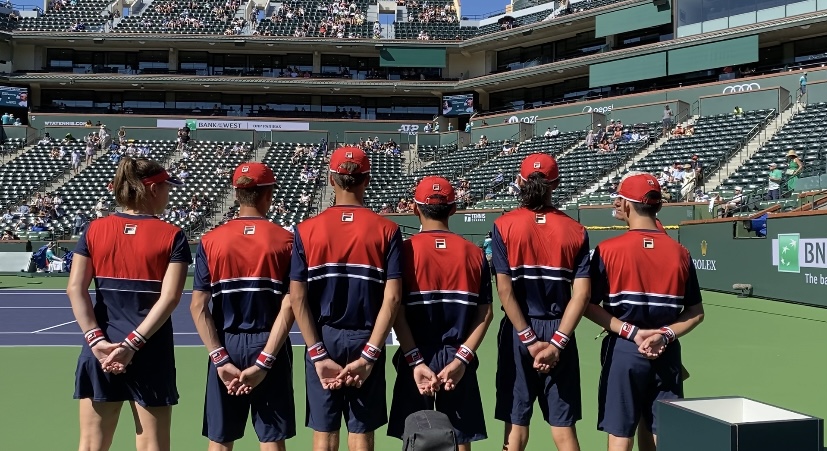 If you’ve attended the BNP Paribas Open, then it’s likely you’ve noticed those few lucky people who get to interact with the players on the court, and sometimes steal the spotlight.

Thousands flock to Indian Wells Tennis Garden each year to watch the greatest tennis players of today compete head to head. They also look forward to the game within the game, as they watch the ball kids tucked away in each corner of the court effortlessly retrieve and feed tennis balls to players and one another without uttering a word.

“It’s one of the best experiences I’ve had in my life,” Sebastian Bascus, a ball kid from Lima, Peru. “I took a plane and flew 9 hours to get here and I’m living my dreams.”

Youth from all over the country and the world sign up to have an opportunity to work with some of the greatest tennis stars of today at the annual BNP Paribas Open. While it is certainly a privilege, they said it’s also a lot of work.

“We’re like on court all day but we love it,” said Giasan Chirico.

But it’s all worth it when they walk onto the court and get the closest seat in the stadium to their favorite players, and pass them a tennis ball.

“It’s surreal because you see them on TV and then all of a sudden, they’re right there in front of you,” said Diliana Iltchev. “It’s just so cool that we get to see the players, we get to walk around the ground. We get to see them practice and play. No one else gets that experience of being so close to the players.”

Some even recall embarrassing, yet unforgettable memories they’ve made with the players.

“I got hit by Taylor Fritz’s serve yesterday, so he came over and said ‘Sorry’,” said Chirico. “That’s my claim to fame. I have this bruise on my hip and I’m like ‘Yeah that’s from him!’”

For some, being a ball kid was a no-brainer. They grew up playing tennis and they wanted a front row lesson from the greats. For others, the experience grew on them after their parents secretly signed them up.

“(I said) ‘What?! I can’t believe you did this’ and here I am four years later never wanting to stop,” said Chirico.

For almost fifty years, ball kids have acted as personal assistants to tennis players. One of the first ever ball kids says it’s an experience like no other.

“I was lucky enough to be a ball kid when this tournament first started,” said Ken Solomon, President of the Tennis Channel. “Being a ball kid is unique compared to any other sport. You are really a part of the match.”

Some things have changed this year at the BNP Paribas Open, but Solomon says tennis wouldn’t be what it is without the commitment of the ball kids.

“Ball boys aren’t going away,” said Solomon. “Linesmen have gone electronic but they’re gonna be a part of this game forever.”