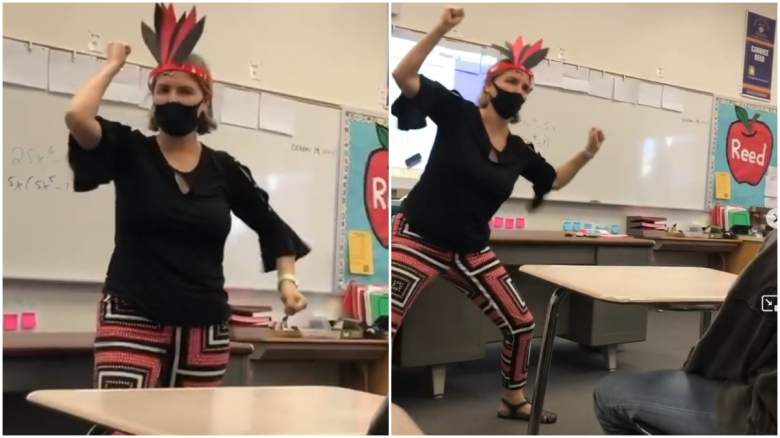 RIVERSIDE (CNS) – A Riverside Unified School District math teacher was
on suspension today following social media posts from her classroom showing
her performing as if she were engaged in a Native American war dance.

“These behaviors are completely unacceptable and an offensive
depiction of the vast and expansive Native American cultures and practices,”
according to an RUSD statement. “Her actions do not represent the values of
our district … The Riverside Unified School District values diversity, equity
and inclusion, and does not condone behavior against these values.

“We are deeply committed to implementing inclusive practices and
policies that honor the rich diversity of our district and the greater region.
We will be working with our students, families, staff and community to regain
your trust,” the statement concluded.

The video, evidently recorded by a student of Native American descent,
captured the masked instructor from North High School wearing head
feathers, chanting and moving around her desk as if in the middle of a war
dance or some other ritual, which was not identified in the video.

Published reports indicated the teacher has worked at North for over a
decade, but RUSD has not confirmed that information, nor her identity.
Some students chuckled during the episode, according to the video.

The reasons for the instructor’s behavior and how they might have
related to the lesson plan were unclear.

The video clips were circulated widely via social media and came to
the attention of RUSD administrators Wednesday.

The teacher was placed on paid administrative leave pending an
investigation, according to the school district.

“It is damaging and disheartening to see Native American and
indigenous culture represented in such a trite and insensitive way,” according
to the legislators. “However, this is not an isolated incident, as such
teaching practices have been used across the nation. It is time that we stop
this behavior. We need to ensure that students learn about themselves in
positive, accurate, and appropriate ways.”