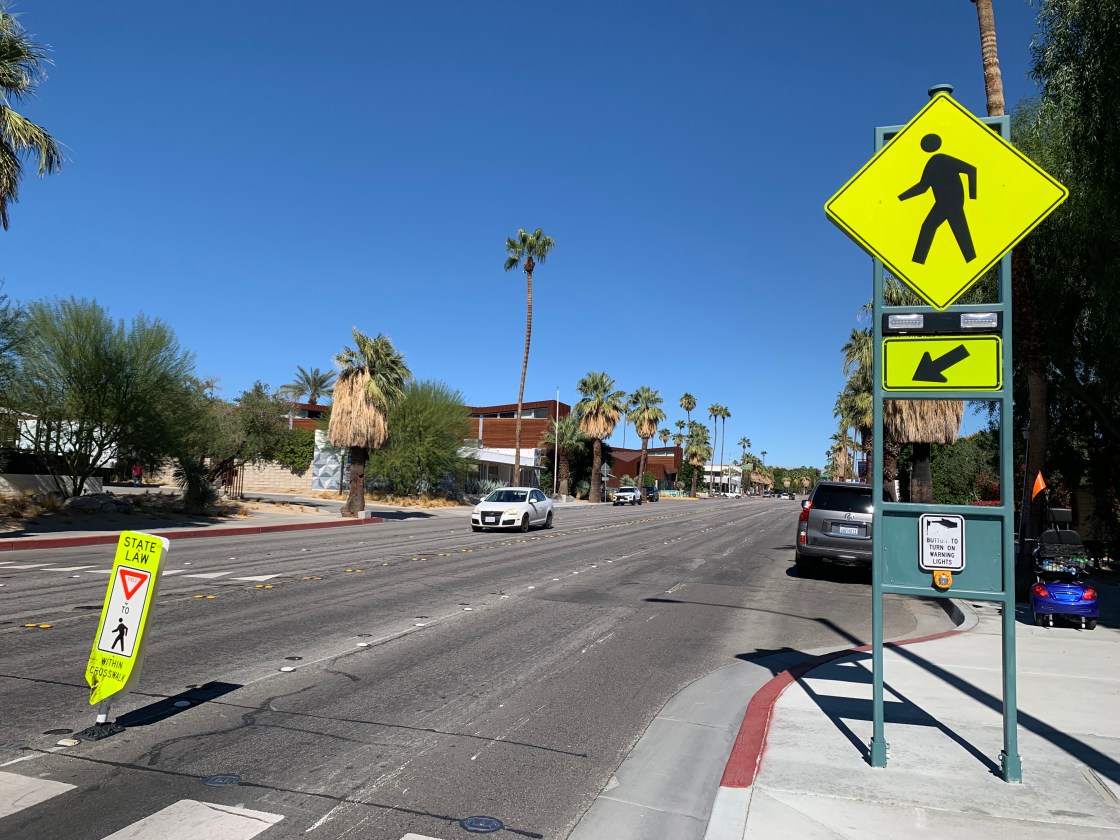 “Just yesterday, I was in the crosswalk and a car came through going 50mph, just zipping through. Not even slowing down.”

Everyday Bryan, braces himself to cross the intersection at Stevens and Palm Canyon in Uptown Palm Springs.

“I’m so vulnerable when I’m in a crosswalk,” said Bryan. “The lights don’t stop people from hitting me.”

He’s been doing this for years now, just barely missing cars speeding past him. To keep himself safe, Bryan wears a flashy neon shirt, rides with a bright orange flag, and blows his bullhorn to notify drivers he is crossing the street.

“The point is to make yourself as visible as possible. It’s amazing people just don’t see you,” said Bryan. “I feel safer with what I’ve done. I still don’t feel totally safe.”

And Bryan is not the only resident who feels that way.

Rivera crosses the intersection everyday multiple times a day to get to work.

“I’ve had cars just fly right through,” Rivera said. “You push the button and no one really stops.”

At this intersection, multiple cars not only don’t break, but continue driving at full speed. One driver pulled over, saying he didn’t even see the caution signs.

“It’s completely invisible,” said Palm Springs resident Billy Kidney. “I didn’t see them flashing at all. That’s why I came back, I was so terrified, and I wanted to make sure everyone was okay.”

Now, both pedestrians and drivers are urging the city to make crosswalks safer for both parties.

“One I think the speed on the road is a bit high for a large amount of pedestrian traffic- 40mph makes me terrified,” said Kidney. “And the sheer fact there are very few lights along the path or stop signs to help slow traffic down.”

Along some crosswalks, there are safety signs, but one thing Bryan would like to see implemented are lights along the crosswalk making it clear to drivers that pedestrians are crossing.

“When it’s flashing, cars are supposed to stop,” said Bryan. “It’d be a lot safer.”

“There needs to be some more improvements to make the city pedestrian friendly,” said Kidney.

It’s not just the lack of safety signs or lights, the sidewalks themselves are oftentimes unusable for disabled residents.

“The condition of the sidewalks in this town are unbelievable,” said Bryan. “So many of these streets you don’t have sidewalks at all.”

Many residents don’t give sidewalks a second thought, but for Bryan, a disabled senior, they are a necessity. He gets around town on his 15 mile per hour motor scooter, or on good days, by walking sometimes with a walker. But, his trips are oftentimes prevented or continuously rerouted due to poorly maintained, disturbed, or missing sidewalks.

“I already have it planned out so I know where to cross the street. It’s a jigsaw puzzle,” he said. “I contacted the city when I first moved here three years ago and their response was we don’t have the money.”

NBC Palm Springs reached out to the city for comment, but did not hear back.