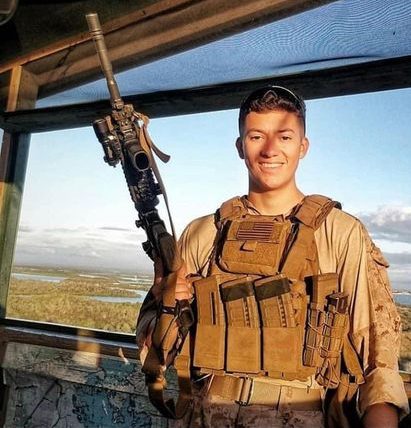 Three days after the community honored local veterans’ in the valley, Southwest Church made a special tribute to one hometown hero who made the ultimate sacrifice.

“We are honored that they’re thinking of our son,” said Herman and Alicia Lopez, parents of Hunter Lopez. “The support that we’ve received from the Coachella Valley and from the community and across the country has been amazing, and so we’re trying to pay that goodwill forward to others.”

“We said ‘What can we do to show our support for you’. And so we thought, ‘Let’s just send them goody boxes’,” said Walt and Judy Van Benthuysen, Founders of American Friends of Our Armed Forces. “But it ended up being so much more than that. God said, ‘No, there’s a lot more here for you to do’.”

Hunter Lopez lived a short life dedicated to service and sacrifice. Now his parents say it’s their mission to keep the legacy of their son and hero alive through the lives of others by supporting the dreams of young servicemen and women who plan to follow in Lopez’s footsteps.

“From the conversation on Aug. 27, the day after Hunter’s passing, we knew that our goal was to keep Hunter’s name out there,” said Herman and Alicia Lopez. “This helps him in a way to help others even though he’s no longer with us.”

Lopez spent much of his life at La Quinta schools, and educators remember him as a leader devoted to serving others.

“Anytime we had an event, Hunter was the first to volunteer, either to help park cars or just escort our vets for Feed the Heroes into the line,” said Sean Webb, Director of Community Engagement of Desert Sands Unified School District. “He was just always one of those who was always there.”

The church in Indian Wells also hosted a Veterans’ Day Car Show with proceeds going to support the Hunter Lopez Scholarship and Save A Warrior Foundation. Together, the community raised more than $15,000 in one day. The Coachella Valley has made it clear that they will never forget the courage and sacrifice of Hunter Lopez, and will continue to honor his life and legacy. And his parents have one message to the community.

“Just thank you to everybody around- without their prayers and support, it would be very difficult for me to get out of bed and push forward,” said Alicia Lopez. “I don’t know how else to say it, but thank you.”