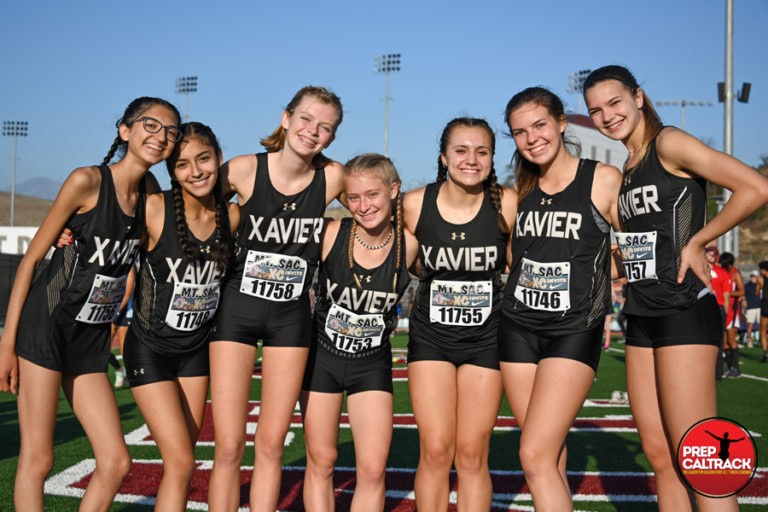 Xavier College Prep’s cross country team has quite the reputation. In the past 13 years, the Saints have qualified for state 10 times. During the Fall 2021 season, for the fourth year in a row, the girls qualified for the division five state finals, and they ended up finishing in 8th place.

Head Coach of the Saints, Aron Lyons says that a winning culture is engrained in Xavier’s cross country program.

“They had a goal at the beginning of the season to continue the tradition. What they recognize is they are part of a continuum rather than just a team. They’ve heard about the success of the team, and they took it upon themselves to carry that on. I think it speaks volumes about who they are, selfless individuals and really committed to each other and committed to the work.”

Cameron Trubee is a junior at Xavier, she is one of those who heard about the Saints’ cross country program and transferred for the chance to compete in the state finals.

“I’m just so proud. I transferred here amid COVID and everything. It’s just so amazing that all the effort and hard work we put in really accomplished something.”

The buzz about cross country is all over campus, which is why Emily Ahlgren tried out for the team this season.

“I’ve seen the success my freshman and sophomore year and that made me come out my junior year. To be a part of it, it was amazing.”

Cayman Dabareiner was not able to compete this season due to injury, but she has been a part of the Saints’ state finals runs in years past. Cayman is mostly proud of her school making a name for itself at the state level.

“It is one of the biggest accomplishments that I’ve ever been a part of, through the whole valley, I know we are the only team that consecutively get there and it’s a really big honor especially Xavier being such a small school.”

Hard work and running for one another is what keeps the Saints consistent, and winning year after year, as senior and veteran runner, Laurissa Carrillo explains.

“I feel like my team and I definitely do earn what we do, because we work very hard. It’s all about keeping the routine. It’s all about really just staying committed to each other, it’s kind of really important to kind of keep that community still intact because it’s really been very important to our success.”

“It is an individual sport,” says junior Catalina Nelson, “but I think the reason that we are so successful is that we’re running for each other, we get up every day just to see each other.”

“I really think like a lot of cross like it is mostly running but you don’t really have to like the running to love the sport. You know, it’s a lot about the team.”

The family-team environment is an essential role to this Saints squad and none of it would be possible without a head coach who cares. According to junior Natalie Saas, coach Lyons is a big reason why she loves to run with the Saints.

“I love working with Coach Lyons, like he’s part of the reason why I love the cross country so much, why l keep coming back. He makes it so special. It makes it feel like a family.”