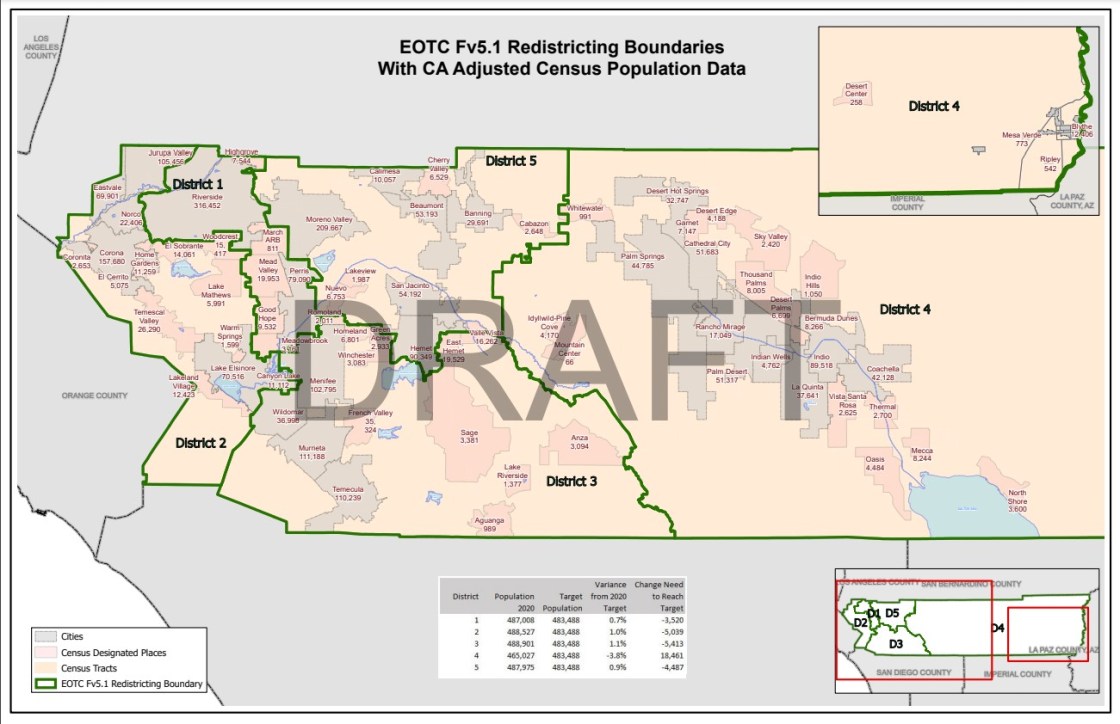 (CNS) – After more than three hours of debate and testimony, the Riverside County Board of Supervisors Tuesday settled on a proposal to redraw supervisorial district boundaries that will ensure most cities and unincorporated communities remain intact within one district, eliminating concepts that didn’t meet that objective.

“The county is changing. The demographics of communities are changing,” Supervisor Kevin Jeffries, who represents District 1, said ahead of the 4-1 vote in favor of Map F5.1. “The county will continue to change and evolve.”

Supervisor Manuel Perez, who represents District 4, was the sole opponent to the redraw, instead favoring a map lauded by the ACLU and other interest groups but which would have sliced multiple cities and communities into disparate parts, particularly on the west side of the county.

“It’s a difficult choice,” the supervisor said. “But it’s the only map that … allows for an effective opportunity to elect preferred candidates and does not crack or dilute the Latino vote.”

His preference would have chopped the city of Riverside in two, as well as carved up Corona and Menifee, while separating the kindred municipalities of Hemet and San Jacinto.

“We have to be careful about identifying people by checking off a box,” said Supervisor Jeff Hewitt, who represents District 5. “I don’t want to do that.”

The map selected by the majority keeps District 5 largely intact and in the same profile. However, it moves Hemet and San Jacinto out of Supervisor Chuck Washington’s District 3 and into Hewitt’s sphere of representation.

“We have to make the best of the districts we have,” board Chair Karen Spiegel said. “People are happy where they live, and they’re fighting for their districts. I’m a proponent of what’s best for the county.”

The chair’s District 2 will expand well to the south under the redraw, encompassing all of the Interstate 15 corridor from Jurupa Valley to Lake Elsinore. The latter was formally part of District 2 and where Jeffries calls home.

District 3 will lose territory. However, Washington will continue to represent the communities where he has been domiciled for over three decades — Murrieta and Temecula. Menifee will also remain under one supervisor — Washington — instead of several, which the city’s representatives avidly sought.

“We have concerns about dividing up our city into three supervisorial districts,” Menifee Mayor Bill Zimmerman told the board.

The sentiments were echoed by Menifee City Councilwoman Lesa Sobek, who said that “as a city that is growing and big, we have so much going on that we would really like to stay whole.”

The municipality was part of Hewitt’s district.

Under the redraw, Jeffries’ District 1 will be the most compressed but will represent all of Riverside and all of Perris. The latter was part of Hewitt’s district.

District 4 will expand across practically all of the San Bernardino National Forest south of Interstate 10, garnering the mountain communities of Idyllwild, Pine Cove and Mountain Center. The western boundary of the district will end at Anza, Valle Vista and Cabazon, with a sliver of Whitewater going to District 5.

The Morongo Band of Mission Indians in Cabazon had emphasized last month the need to keep the San Gorgonio Pass and tribal lands together, and the redraw accomplishes that for the most part.

It was the sixth public hearing on the redistricting process that began in mid-September, and the board entered the hearing with four different maps from which to choose.

The principal goal remained having 483,637 residents per district. However, there were other considerations, including adhering to components of the 1965 Voting Rights Act, which prohibit “racially polarized voting,” mandating that communities of color not be divided up so as to lose their influence in elections.

Transportation & Land Management Agency officials said all of the maps met the baseline criteria, though there always remains a risk of lawsuits.

A final board vote on Dec. 14 is expected to formalize adoption of the redraw. No further public testimony will be heard.

State and federal law require that the districts remain contiguous, meaning no gerrymandering or broken lines to fit cities and unincorporated census-designated communities into pockets of one district or another. District 4 had the largest deficit at 26,173, while District 1 had the smallest at 11,079. Spiegel’s District 2 was down 17,579, according to the county Executive Office.

Municipalities decide for themselves how to divvy up wards.

More details regarding countywide redistricting are available at https://rivco.org/about-county/county-boards-committees-and-commissions/county- redistricting-efforts.