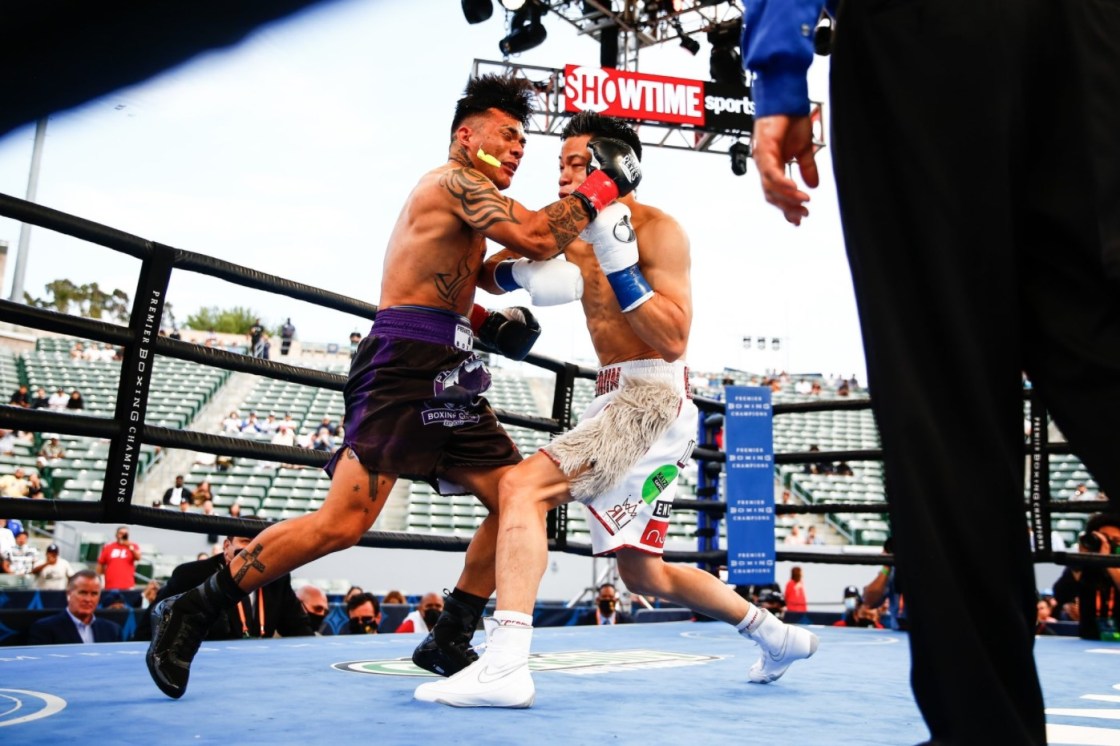 Undefeated, 21-year-old Brandun Lee is set to enter the ring again on Saturday, December 11th at Dignity Health Sports Park in Carson, California. Lee will be taking on Juan Heraldez on the undercard of the Nonito Donaire vs. Reymart Gaballo WBC bantamweight title fight.

Lee is anticipating extending his undefeated status, hoping to reach 24-0 against a tough opponent. Heraldez is part of The Money Team aka one of Floyd Mayweather’s fighters. Lee is excited about the opportunity to fight in this kind of limelight against one of his hero’s fighters.

“Growing up I always looked up to Floyd Mayweather, now that I’m fighting one of his fighters. It’s like, you’re going to eat or starve on this one.”

Heraldez (16-1-1) is coming off his first loss, a TKO at the hands of Regis Prograis. This will be Lee’s toughest opponent to date, and he is ready for the challenge and stuck to normal preparation for his opponent.

“Everything’s been the same. Every fight, we train 110%. I’ve been sparring with Olympians, world champions, former world champions. So I’m getting the best quality work and come December 11th, I’ll be ready.”

Lee and his trainers have the “if it ain’t broke, don’t fix it” philosophy. One that has been working for Lee, 21 of his victories have ended in knockouts, with his fights lasting an average of 1.8 rounds. Lee packs a punch, specifically, his right hand and once he lands that, it’s lights out for his opponents.

“As soon as I lay my punch, when I hit people the right hand, they just fall. Once I land the right hand and then I’ll follow-up and get them out of there.”

The La Quinta native receives a lot of love from fans of different backgrounds. Lee is a southern California native and a Mexican/Korean American. Like most boxers, Lee is always proud to showcase all parts of his ethnic and national backgrounds in the ring.

“I think it’s dope because you know, I’m American, my father’s Korean, my mother’s Hispanic, my supporters are there I can just feel the energy soon as I feel that, my adrenaline starts pumping, and then it’s time to work.”

Lee also does a great job of interacting with fans online, something he feels is important to do for his supporters.

“I feel like they support me so, at the end of the day, I’ve got to give back to them. I remember growing up as a little kid and reaching out to Mayweather, Oscar, or Jones you know, no comment. They never liked my message. So I kind of have a platform where I can do that for the kids who look up to me.”

Brandun Lee was expecting this year to be his breakout year, but like other plans, COVID-19 foiled them. Looking to end the year of 2021, 3-0, Lee still had a great year. However, he is still known to the boxing world as an “up and comer”, “great prospect,” or even “the future”. If he wants to be considered one of the best now, he’s got to continue to put in the work.

“I just need to keep on doing what I’m doing, going in there, knocking people out, winning and of course just focus on my craft.”