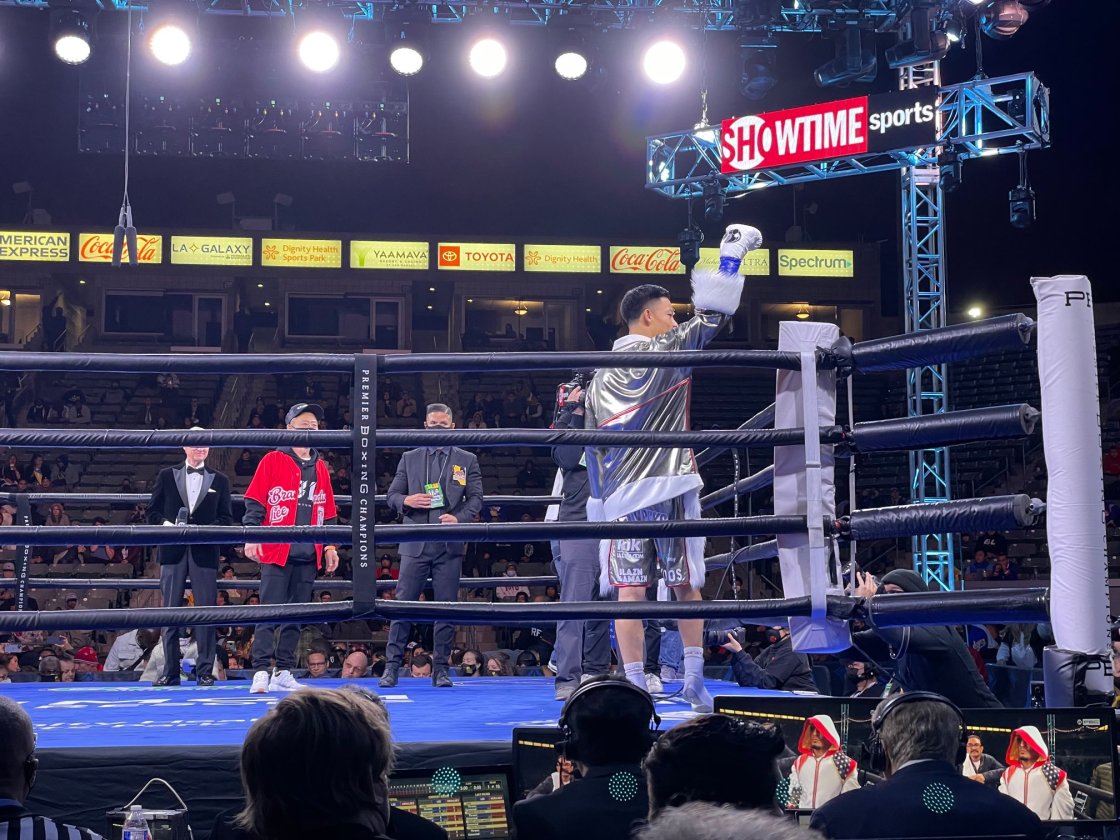 Brandun Lee keeps his perfect record (24-0) and earns the 22nd knockout of his pro career against his toughest opponent to date.

On Saturday, December 11th, at Dignity Health Sports Park the La Quinta native took on Juan Heraldez on the undercard of the Nonito Donaire vs. Reymart Gaballo WBC bantamweight title fight. Lee knocked out Heraldez in the seventh round, a one-two hook from the right that sent Heraldez to the floor for good.

Last night I showed the world that I can box and punch as I please! MUCH LOVE to all my fans and supporters who came out! 24-0 BABY 🔥😎 #Blessed pic.twitter.com/glKlLwtnyn

Lee has never had a fight last longer than four rounds, making this his longest match of his pro career. Heraldez made Lee earn this one, in part by defending Lee’s notorious right hand pretty well. Heraldez kept Lee at bay each round with just defense. Heraldez landed punches but was much slower than Lee, and as the fight progressed, Lee played it smart and waited for his opportune moment. That moment came two minutes, eleven seconds into the seventh round when Lee took Heraldez out with his strong right hand, earning his 15th straight career knockout.

If this fight went through all ten rounds, Lee would’ve still been the winner, he landed far more shots on Heraldez in each round, Lee was even caught smiling after landing a few combos in the sixth round.

That was the most notable part of Lee’s victory, he proved to the world that he can last in a match, play defense through the rounds and still knock somebody out.

“Everyone thinks I can’t box,” Lee says about his doubters post-match. “Everyone thought I was just a power puncher and I tell people, I can box! You know, I got good defense, I could if I wanted to just box all day and win. I can do both, go forward and backward.”

"If I wanted to, I could just box all day and win."

Prior to Lee’s victory on December 11th, his matches only lasted on average, 1.8 rounds. Lee understands that winning longer boxing matches will benefit his career in the long run as he competes against tougher opponents.

“I think I did well, I feel like my main trainer, my father thought different. I think he was expecting me to knock him out much sooner. But um, you know, it’s something that myself and my team we’re going to learn from. I can’t knock everyone out every time.”

People always ask me who I want next.. IDC! LINE EM UP 💪🏼

The Coachella Valley native has always been appreciative of his fans, who came out in droves to Carson, CA, and support their favorite boxer. You could hear fans chanting “Brandun Lee” from all over Dignity Health Sports Park throughout the match. Lee says that being able to see his fan support at his fights is something he will never get over.

“Man, it’s a great feeling. It’s a feeling you can’t explain and I’m just blessed, thank you to everyone who came out.”

Lee ends the 2021 year 3-0, with three knockouts, and looks forward to next year. If all goes according to plan, 2022 should be, his breakout year.