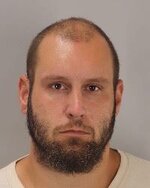 INDIO (CNS) – A felon and known gang member who was allegedly in possession of “ghost guns” pleaded not guilty Tuesday to weapons charges.

Brandon Matthew Myers, 33, of Desert Hot Springs, was arrested Thursday when the Riverside County Sheriff’s Department served a search warrant in the 73000 block of Pacheta Square in Thousand Palms.

He pleaded not guilty Tuesday morning at the Larson Justice Center. He was scheduled for a felony settlement conference on Feb. 3. He remains held $80,000 bail at the John Benoit Detention Center in Indio.

According to Sgt. Paul Heredia, deputies located a number of firearms and ammunition belonging to Myers while searching the residence. The firearms did not have serial numbers, which makes them untraceable “ghost guns.”

Myers, who was out on bail on a previous illegal possession of firearms charge, was subsequently arrested, according to deputies.

Myers has a number of open and closed cases in Riverside County and has been convicted of burglary and possession of controlled substances.