Residents, Visitors Warn of Rental Home Scams Ahead of Coachella 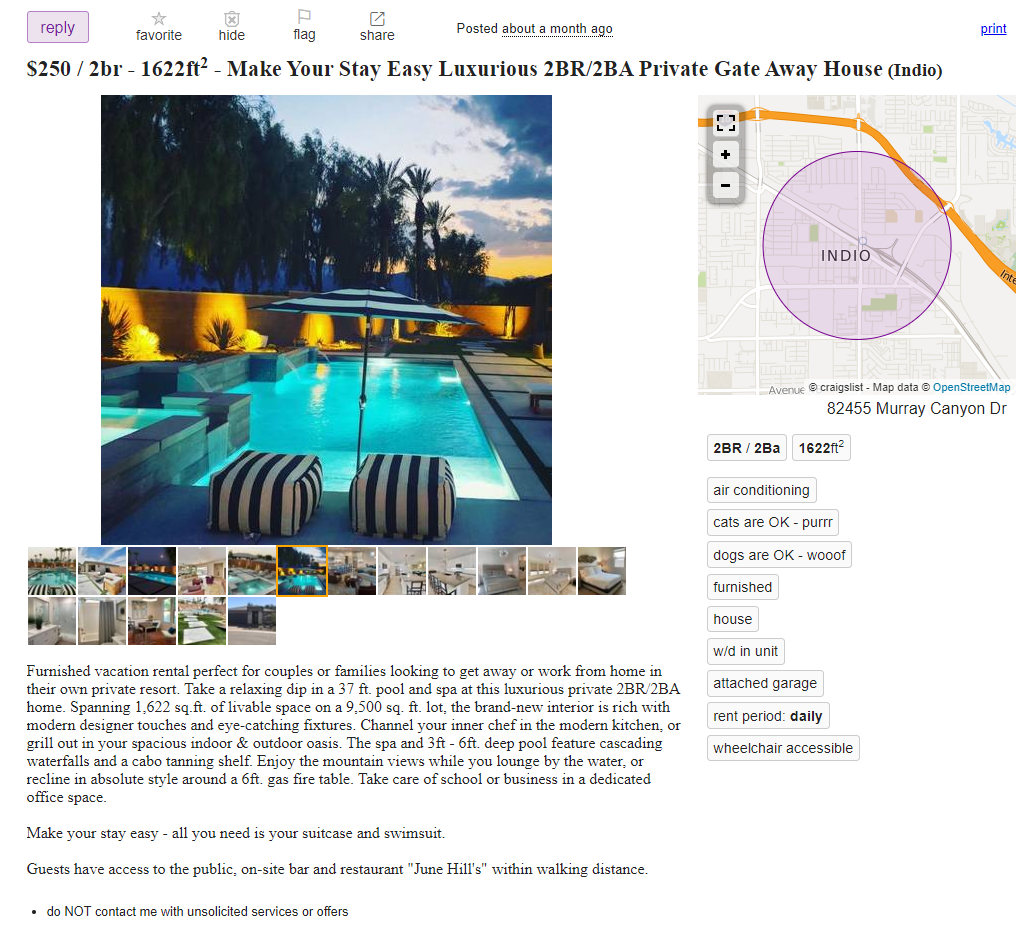 “I can’t let this happen to other concert goers or tenants or homeowners,” said Malia Rivera, an Indio homeowner and landlord. “This is horrible.”

Julissa Polido has been a faithful Coachella attendee for years and she is looking forward to returning this year. While searching for a more affordable rental option for the weekend festival, she came across an eye-catching listing posted on Craigslist.

“It looked like a great deal and I was like ‘Wow, are these people just really wanting to discount their house for whatever reason this year?” said Julissa Polido, a Reno resident.

Polido said she had a conversation via email with William E. Coon – who the listing was under – about check-in days and times, amenities, and said Coon even sent her an invoice.

She typed in the listing address on Google and found the homeowner as well as her contact information.

“I received a phone call yesterday from a woman in Nevada who asked if my home was still available as it was listed on Craigslist for $250 a day for the Coachella music festival,” said Rivera. “She called me and said ‘Hey, is your home still available?’ and I said our home is already rented through May  and is going for over $10,000 for that month alone, and we do not rent it on a short-term basis.”

Rivera was shocked to find her home on the advertising website and even reached out to the scammer herself pretending to be interested in her home.

“(Polido) and I said this is a scam. We have to flag it on Craigslist. It took a day to do that,” said Rivera. “I apologized to her and told her that we have to let other concert goers know that this could happen. This could even happen to homeowners.”

Ahead of the biggest music festival in the world, Polido and Rivera are warning renters and landlords to beware of rental scams.

“It’s pretty scary how somebody looking for a low-cost hotel or home for Coachella could fall for this,” said Rivera.

They say when booking a rental, do your research and ensure that the property you are interested in is listed with a credible source or property management.

A red flag to look out for are people requesting large sums of money or wire transfers up front.

Also, if you have difficulty getting in contact with the person listing the property or if they send vague messages, this could also be a sign that it’s a scam.

Finally, keep in mind the age old wisdom of…

“If it’s too good to be true it probably isn’t true,” said Polido.