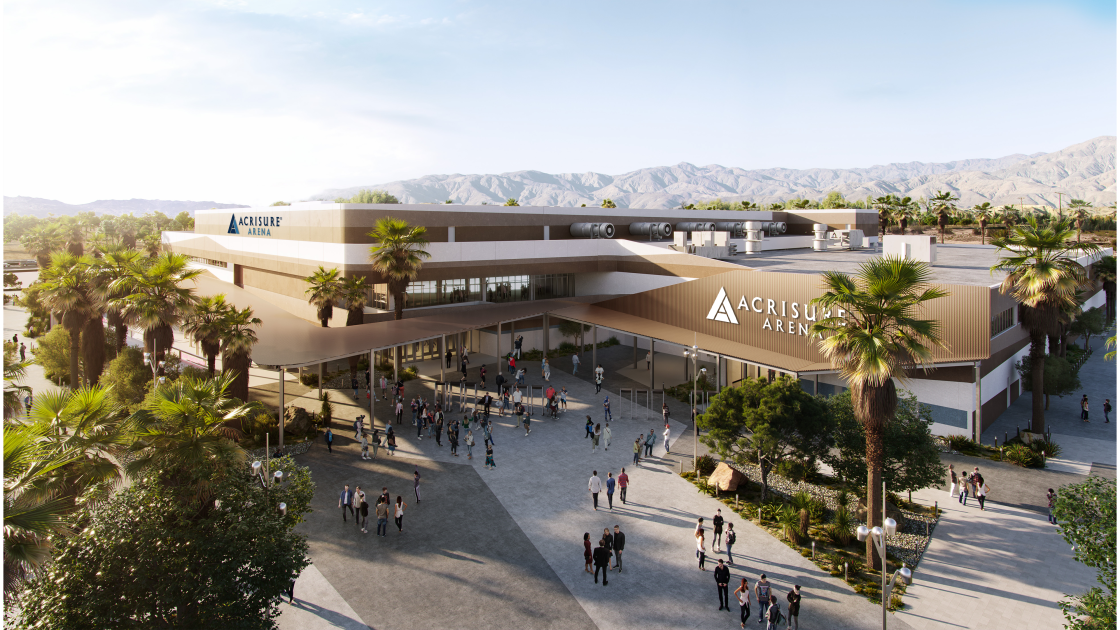 Copy
PALM SPRINGS, CA (February 16, 2022) – Acrisure Arena, the world-class venue designed specifically for Coachella Valley, is marking a major milestone of construction with its “Topping Out” beam placement on the more than 300,000 square-foot venue. There are roughly 5,100 structural steel pieces totaling 2,737 tons of structural steel. There are four (4) box trusses that make up the Arena high roof ranging in weight from 156 tons to 237 tons for a total of 809 tons. The Topping Out beam indicates the steel-framing structural phase of a project is complete. To celebrate this major construction milestone, Acrisure Arena hosted a Topping Out Ceremony on the morning of Wednesday, February 16.
Traditional “topping out” ceremonies on construction sites have a centuries-old history with a tree affixed to the final beam as a symbol to show no structure is taller [in spirit] than a tree. In modern times, the topping out ceremony is an opportunity to celebrate the construction workers and thank them for their contributions to a safe jobsite.
“This is a very special milestone for Acrisure Arena,” said John Bolton, general manager of Acrisure Arena and SVP Oak View Group Facilities. “The placement of the Topping Out steel beam marks the completion of one of our biggest moments of construction to date. We are humbled and honored to have over 140 unionized tradesmen and women dedicated to making the first arena in Riverside County safe and successful.  We can’t wait to begin enclosing the Arena and opening our doors later this year.”
The landmark occasion was commemorated when ironworkers placed one of the final steel beams on the 11,500+ seat venue in the attendance of the construction and design team and Acrisure Arena key stakeholders. This event and the signing of the beam symbolized a celebration of all the hard-working men and women that took part in constructing Acrisure Arena over the past year.
“We have built Arenas and are building Arenas for OVG all over the United States and they are committed to delivering the absolute best entertainment experience for their patrons. Coachella Valley will be no exception, this is going to be a world-class facility,” said Bob Hart, executive vice president, and regional manager, AECOM Hunt.
“The behind-the-scenes work on these types of facilities starts way before the community starts to see any activity on site,” said Bill Deiter, project executive, AECOM Hunt. “Now that the community can begin to see the progress, the excitement and anticipation starts to build toward the grand opening. We at AECOM Hunt share in that excitement and enjoy engaging in the community’s interest in the project. This is what we do… we love building sports venues.”
Since starting construction in June 2021, more than 160 workers have been on-site each day with 43 separate subcontractors working on the Arena. The project is privately funded at no risk to Riverside County taxpayers. Construction of the new arena is expected to create hundreds of permanent and temporary jobs for the community. Additionally, during construction, more than 75% of labor has been sourced from Riverside County.
Acrisure Arena will be located in the heart of the Coachella Valley on 43.35 acres of land at I-10 and Cook Street, land owned by the H.N. and Frances C. Berger Foundation. The arena will be more than 300,000 square feet and feature 11,500 seats, including modern suites and four premium hospitality clubs available only to 920 Premium Seats and Suite ticketholders. It will be the home of the Seattle Kraken’s American Hockey League (AHL) team, the Coachella Valley Firebirds, and include an adjoining facility that will serve as a year-round community gathering space and the training center for the AHL team.
With a focus on prioritizing technology, sustainability, and green initiatives, Acrisure Arena features ten solar panel canopies covering approximately 220 parking spaces as well as electric vehicle charging stations for parking. The project has also implemented a Construction Waste Recycling Plan, which has recycled more than 265 tons of construction materials to date and is less than 9% from achieving its overall total project goal, adding $13,000 of approximate savings to the project.
The world-class arena will also be built for music and host the best and biggest names in the music industry on an annual basis. In addition to sports and entertainment, the arena will accommodate conventions, large meetings, international events as well as award shows and exhibitions. The arena is projected to open in the last quarter of 2022.