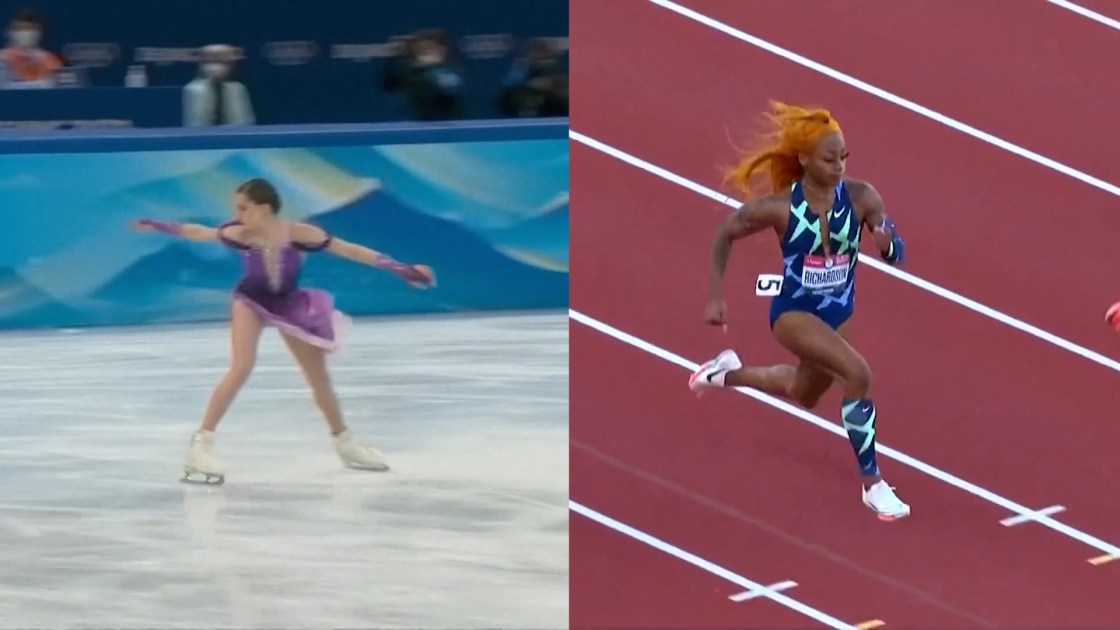 Russian figure skater Kamila Valiyeva has been the center of controversy after she tested positive for a performance-enhancing drug (PED) called trimetazidine and was still allowed to compete in the winter games. Many compared Kamila to U.S. track star Sha’Carri Richardson, who was not allowed to compete at the Tokyo Olympics after testing positive for THC, a non-PED found in marijuana.

However, their situations could not be more different.

Kamila Valiyeva was still allowed to compete for two reasons. Due to her age, she’s considered a protected person, meaning she’s not directly responsible for her actions and because a full investigation still has to be done.

“The main element was the fact that if the athlete would be suspended she would not be able to participate in the games, and the damage for her would be irreparable,” said Denis Oswald of the International Olympic Committee. “If she wins gold, the medal can always be withdrawn.”

When it was announced that Kamila would be allowed to compete, there was a public outcry, from U.S. Anti-Doping Agency to former gold medalist Olympic figure skater, Tara Lipinski.

“In my opinion, she should not be skating in this competition,” said the 1998 Olympic champion. “We have to remind ourselves she is just 15 and I know what it’s like, but a positive test is a positive test.”

The drug test that came back positive for the PED is from a test Kamila took on December 25th, 2021. Right before she competed in the team skate event in Beijing last week, she and every other athlete were tested again, this time her results came back negative for all PEDs.

Alan Abrahamson is a sportswriter for 3 Wire Sports, who has covered the Olympics for over 20 years. Abrahamson is in Beijing for the Winter Games and says that there are not enough facts to place blame on Kamila, the IOC, or Russia.

“This is not a case about ‘Russia, Russia bad.’ This is a case about due process, fundamental fairness, and about a 15-year-old girl.”

Some compared Kamila’s case, to that of U.S. track star Sha’carri Richardson, who was not allowed to compete at the Tokyo summer games after testing positive for marijuana, a banned substance by the anti-doping agency but not a PED.

Sha’carri Richardson herself took to Twitter and claimed that race was a factor in their cases.

Can we get a solid answer on the difference of her situation and mines? My mother died and I can’t run and was also favored to place top 3. The only difference I see is I’m a black young lady. https://t.co/JtUfmp3F8L

However, the International Olympic Committee was quick to refute Richardson’s claims.

“In terms of Ms. Richardson’s case, I mean, she’s tested positive way ahead of the games,” said IOC spokesperson Mark Adams.”We started to deal with that case on time before the games. Ms. Richardson accepted a one-month period of intelligibility. So I would suggest that there isn’t a great deal of similarity between the two cases.”

Back in July 2021, the IOC and U.S. anti-doping agency, along with the world, had sympathy for Sha’carri, who admitted to using the banned drug, marijuana as a way to cope with the sudden loss of her mother.

However, USATF said despite the extenuating circumstance, they could not change the rules ahead of the games.

According to Abrahamson, in both Kamila’s case and Sha’Carri’s, the right protocol was followed.