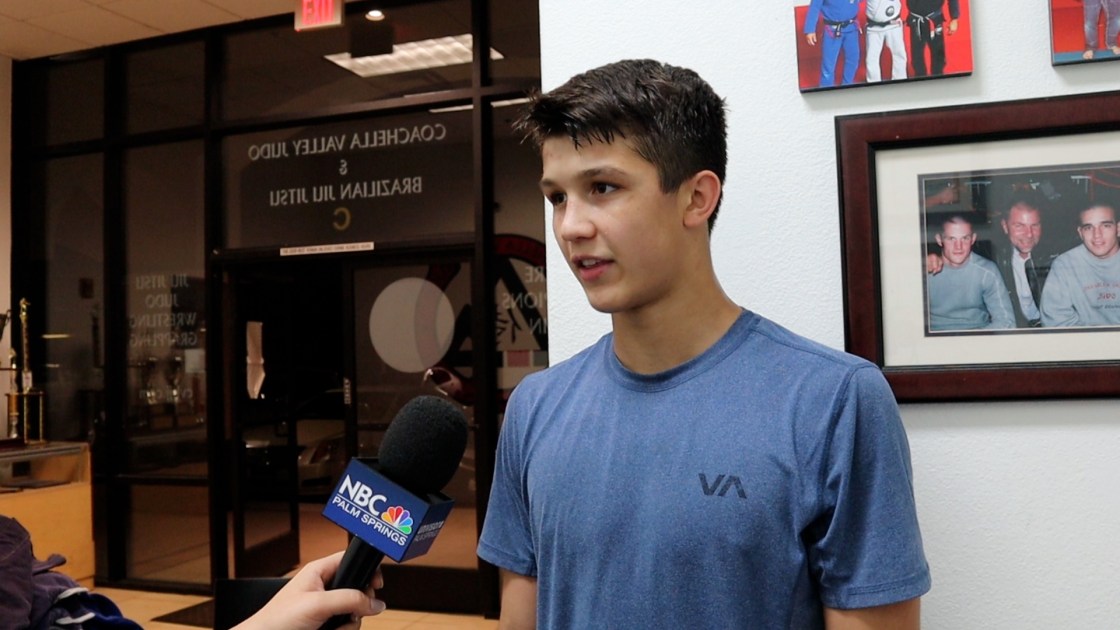 Beau Mantanona, a wrestler from Palm Desert high school made it to the CIF state title match(138 lbs.) taking on Jack Gioffre. When time ran out in the match, the scoreboard read 6-3 in favor of Mantanona, or so he thought.

“It was a pretty defensive match,” says the state champ-runner up. “He (Gioffre) is winning by one point going into double overtime. Then, it’s my turn on the bottom, and about 15 seconds in, I hit a little move and get the reversal, so they called two points, and then they swiped for near fall so then two more points. I was winning 6-3. So I thought, you know, as time runs out, I get up, I celebrate thinking I won the match. I go to shake his (Gioffre) hand and to get my hand raised and they raise his hand. It’s just you know, why me, it was it wasn’t fair.”

Up until the state title match, Mantanona was undefeated during the season and ranked #1 in the state for his weight class.

🚨 Major controversy at yesterday's California State Tournament. The ref appears to give Beau Mantanona the reversal & near-fall but then waves the call after the match is complete, giving Michael Gioffre the 138lb title. You make the call. pic.twitter.com/M3MNOoqtQi

When the officials changed their call, it cost Mantanona four points and the state title. When the match ended, officials provided no explanation to Mantanona. Instead, they immediately left the building leaving Mantanona and his supporters in shock. Especially his coach and father, Anthony Mantanona.

“All that was said was no loss of control. That was it. Kind of like they stole something, you know, they disappeared pretty quick. The other coaches and the other kid, they all disappeared. I don’t think they felt too proud of whatever just went down. I mean, the whole arena if you were there, I think every person in that arena knows what happened.”

Cathedral City high school wrestling coach, Eric Valenzuela explained in a YouTube video how according to the National Federation of High School Associations rulebook, the reversal and near-fall points Mantanona earned, should have counted.

“This is in the rulebook right here. That is a perfectly good reversal right there, and if anything, at a bare minimum that is a loss of control.”

Mantanona says that if the referee never called the reversal, it would have changed the way the match ended.

“Because I was in a close position with 15 seconds left, I at least would have gotten one point to send it to triple overtime. Thinking I had the points, I just sat there. When you’re waiting with a really short time left, you go strictly defense. You’re not trying to score and get countered or anything, you’re just holding on to what you got.”

CIF provided NBC Palm Springs the following statement, essentially sticking with the call the officials made when they took points away from Mantanona: 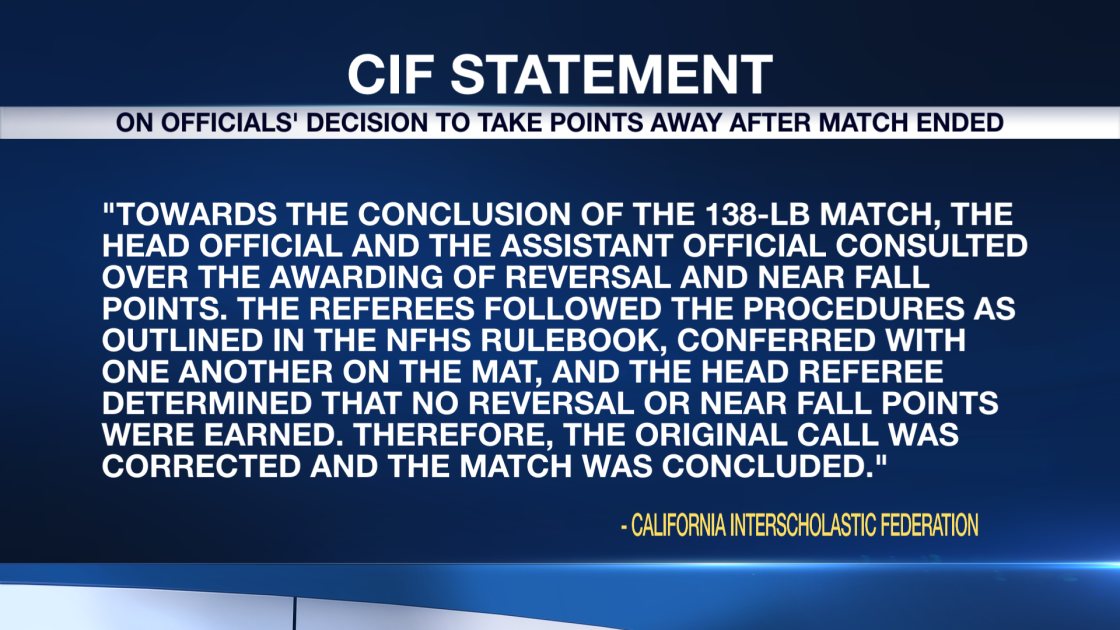 When news began to spread on how Mantanona lost the state title match, the sports world erupted with disbelief and anger from wrestling fans to two-time UFC champion Daniel Cormier.

When asked if CIF would be willing to give Beau Mantanona an apology on how the entire situation was handled, this is what they responded: 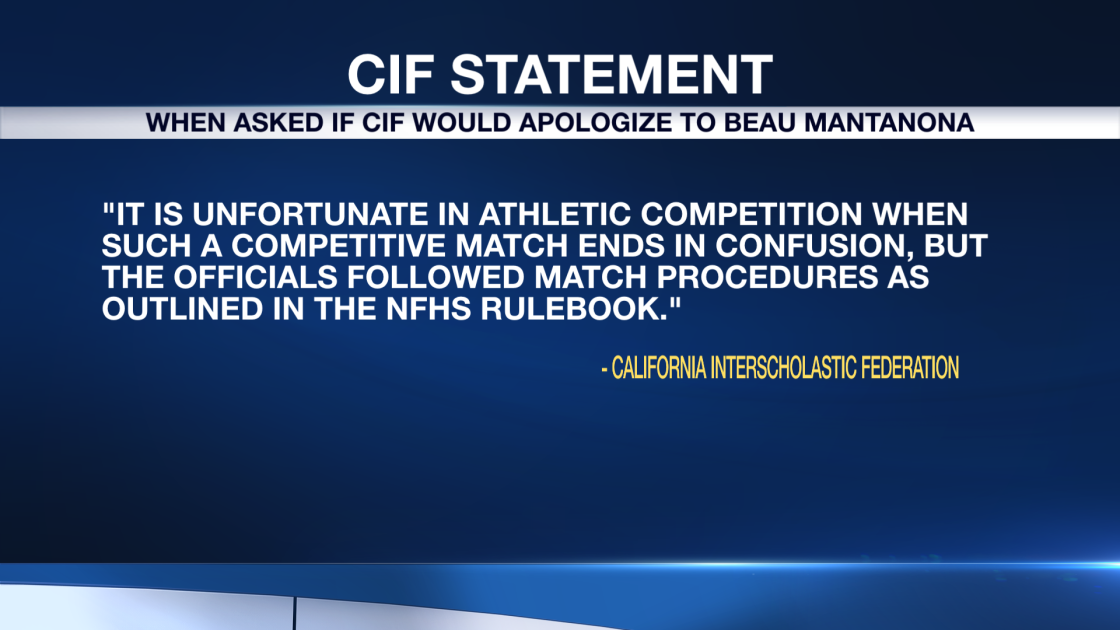 Fortunately for Beau Mantanona, who recently committed to Michigan for wrestling and is a member of the USA Cadet World Team, his career will not be defined by this state title loss.

I am proud to announce my commitment to The University of Michigan! Thank you to my family, friends, and coaches that have helped and guided me on and off the mat to this point! Excited to continue my career as a Wolverine! GO BLUE! 〽️🔵 pic.twitter.com/lSkCE2s1wU

“I just use it as fuel you know, maybe I didn’t do enough. I shouldn’t have left it in the ref’s hand, or something that small could have lost me. So just looking to get better and back in the room.”

However, Beau says that it would go a long way if CIF could provide him with some sort of explanation.

“I never got an explanation I just thought I want and they raised a kid’s hand and they were gone and it just left me kind of you know in shock.”

After @MantanonaBeau won – then actually lost the state title wrestling match, all he wants from @CIFState is an explanation.

Hear what CIF had to say about the whole thing, tonight on @NBCPalmSprings at 6 PM @PalmWrestling pic.twitter.com/1oqLCyNorB