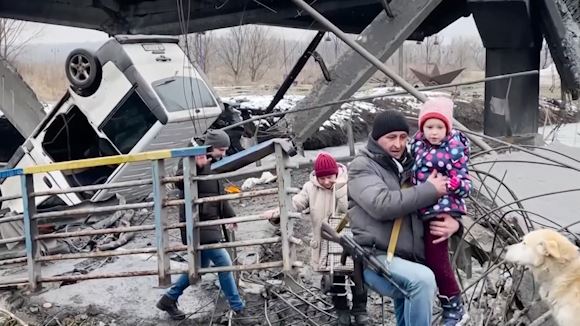 A call to action.

That’s what Steven Geiger, founder of the Mensch International Foundation, is asking from people across the Coachella Valley to help the people of Ukraine.

Whether it’s for food, clothing or gas for cars, Geiger is asking the desert community to help the countless refugees in Europe who are struggling to get basic needs.

But Geiger has another message.

“We, as Americans, have got to stop him,” he said. “The grassroots people should write to their congressmen, to their senators, to the vice president, to the president. Write to them. Say stop him. We gotta stop him.”

But, there’s a bigger reason why he is so adamant.

Geiger is a refugee of war.

“We escaped Hungary on November 29, 1956. Our apartment building was shot at by Russian tanks. It caught on fire. We had to escape for our lives from the building from the hideout in the basement.”

Geiger came to the United States when he was barely nine years old, and his path getting here is eerily similar to what people are currently experiencing in Ukraine and across Europe.

The foundation is also hoping to honor President Zelesnky as they have done for three other presidents.

For ways you can help support Ukrainian refugees through the Mensch International Foundation, see below.