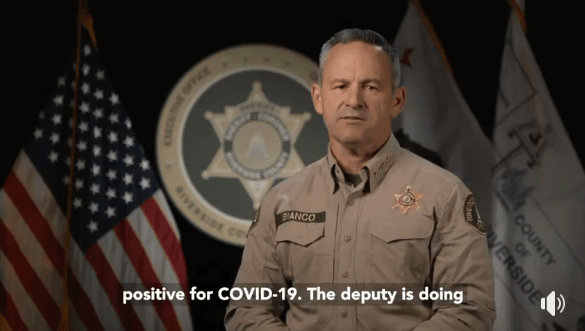 RIVERSIDE (CNS) – The Board of Supervisors Tuesday authorized Riverside County Sheriff Chad Bianco to accept a $150,000 federal grant intended to support law enforcement operations in outlying communities, which for the sheriff will mean targeting criminal activity in Aguanga and Anza.

“The communities are positioned within a mountainous and rural area of the county,” according to a sheriff’s statement posted to the board’s agenda. “Two deputies are currently assigned to patrol the area; however, they are also responsible for additional unincorporated areas. This grant (will enable) the sheriff’s department to deploy deputies on overtime … to conduct high-visibility patrols.”

The U.S. Bureau of Justice Assistance’s Rural Violent Crime Reduction grant was awarded to the sheriff last fall. The funds must be spent by October 2024.

Sheriff’s officials said Aguanga and Anza have been impacted by higher rates of homicide and assault over the last five years.

“This uptick in crime directly results from narcotics and marijuana trafficking, sales and cultivation plaguing the rural communities,” the agency said.

The Anza Valley contains an estimated 2,000 to 3,000 illicit cannabis grows, some in locations that cannot be accessed except by all-terrain vehicles, according to the sheriff’s department.

Anza’s population is roughly 3,100, while Aguanga is home to an estimated 800 residents, according to available U.S. Census data.

“In addition to high-visibility patrols, deputies will seek proactive efforts to identify parolees and probationers in the area, especially those previously convicted of violent crimes,” the sheriff’s department said. “Once identified, deputies will conduct parole and probation checks, along with state parole officers and county probation officers. Overtime will also be used to fund sweeps within Anza and Aguanga.”

Personnel assigned to the sheriff’s Hemet station will be handling the operations funded by the grant.