Golf Cart Theft on the Rise 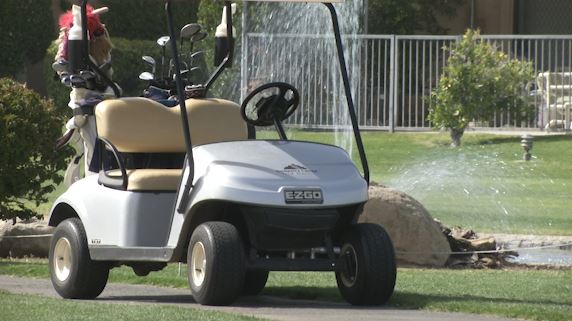 Usually when you’re golfing with a cart, you pull up to the tee, grab your club, and walk onto the course.

Many wouldn’t think to turn off the cart and take the keys with them.

But now, one avid golfing family is warning others after they became victims of a brazen theft on the fairway.

This family was playing at a gated golf course in Cathedral City on Monday.

They were in the middle of putting when someone on a bike pulled up to their cart about 50 yards away.

The thief ditched the bike, hopped in their golf cart, and drove away with their clubs, purses, wallets and everything else inside the cart.

The family tried to stop the thief, but before they could, he disappeared into the wash with all of their things.

Soon after they were robbed, the thieves started taking their money and charging their credit cards.

She said she did not want to be shown on camera since her identity could still be with the thieves.

“I’m motivated to let other golfers know that this is an area where golfers need to be aware, and the public in general, that these people are lurking out there trying to take advantage,” she said.

And she has a warning: Don’t leave personal belongings in your golf cart and take your keys with you.

She says Cathedral City police have been very attentive and they have some promising leads.

Since this has happened twice on the same golf course within a week, we reached out to Cathedral City Police Department and the course to see what they are doing to stop this from continuing, but we have yet to hear back.