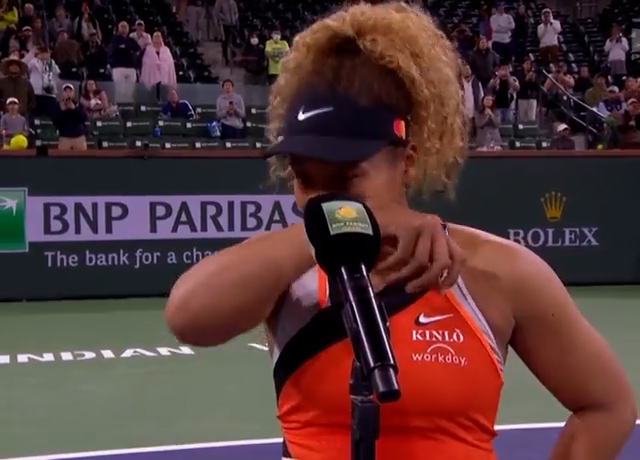 On Saturday night, March 12th in stadium one at the BNP Paribas Open, Naomi Osaka had just lost the first point during her tennis match against Veronica Kudermetova.

As it got quiet, one spectator shouted out, “Naomi, you suck.”

Nobody pointed out the heckler, so they were not kicked out.

Osaka then approached the umpire chair, asking to borrow her microphone to say something to the heckler.

Chair Umpire: “What do you want to say?”
Osaka: “I just want to say something, it’s just on my heart.”

I was there, the “fan” waited until it was quiet, then yelled “Naomi you suck”. Sounded like it came from someone in the suites too, nobody pointed them out. The fact that this is NOT the first time a WOC has been heckled at Indian Wells is not a great look for the tournament. https://t.co/Q8nEmVBgTV

The request was denied, and despite fans cheering in support of the 4-time grand slam champion, the frustration brought Osaka to tears. Osaka goes on to lose in straight sets (6-0, 6-4) to Kudermetova.

After the match, Osaka explains to the crowd why she was so upset.

“I’ve gotten heckled before like it didn’t really bother me, but it’s like heckled here? I’ve watched a video of Venus and Serena (Williams) getting heckled here. If you haven’t seen it, you should really go watch it, and I don’t know why, but it went into my head and I got replayed a lot.”

In 2001, at the BNP Paribas Open in Indian Wells, Serena, Venus, and their father, Richard Williams was berated by hecklers in Indian Wells, which prompted the Williams sisters to boycott the tournament for 14 years.

More than 20 years after that incident, Serena Williams still says that it is a very dark memory in her tennis career. On November 17, 2021, Serena Williams went on the Red Table Talk Show with Will Smith and explained how she experienced anxiety when she returned to compete in Indian Wells in 2015.

“I mean, it was hard. Talk about post-traumatic stress and mental anxiety.”

After Osaka, we now see a trend of top WTA players who happen to be black women, heckled in Indian Wells, despite the BNP Paribas’ recent focus on championing women of color in the sport of tennis.

“I think the trend I see in the tennis world here is very constructive and we are delighted to be really part of it,” says BNP Paribas USA CEO, Jean-Yves Fillion. “Equal access, equal pay, but really supporting and in the world of today, I think it’s even more important, mutual respect.”

With young, women of color climbing up the WTA rankings like Coco Gauff and Leylah Fernandez, it may call for a shift in perspective for tennis fans in Indian Wells.

Osaka is the former WTA #1 in the world, the first Asian to ever hold that ranking, and an advocate for mental health. Her peers believe that tennis needs her and the other young women to change the future of the sport.

Sloane Stephens and Naomi Osaka met in the first round during the 2022 BNP Paribas Open, in which Osaka won 3-6, 6-1, 6-2. After the match, Stephens spoke highly of Osaka and her impact on the game of tennis.

“She’s trying to find the right balance and she’s trying to figure out what works best for her and we can only support her in that. She’s been great for our game and a great representation of what tennis can be and what our champions can look like. She’s great for kids who look like her and want to be like her. ”