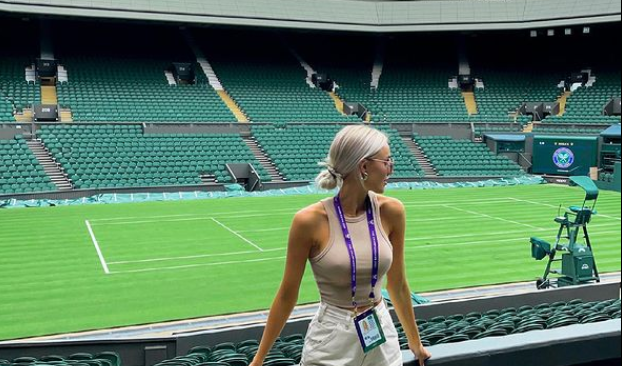 Tennis has been a beloved international game for years, but in the United States, tennis is far from being the most-watched sport. It sits behind football, baseball, basketball, and hockey. With young Americans climbing up the rankings like Taylor Fritz, Coco Gauff, and Reilly Opelka, tennis is entering a new era with a new audience.

The ATP and WTA tours have made great efforts in recent years on developing digital content, but players say there could still be more to do in order to attract new tennis fans.

“I think it’s good,” says #20 on the ATP tour, Taylor Fritz. “It’s just pushed out to people that are already tennis fans and I think that we need to expand and just attract a different audience.”

That is why Morgan Riddle and Taylor Fritz are taking it upon themselves to help popularize tennis in the United States.

“I saw the opportunity to really bring it to a new audience,” says Riddle, a social media influencer. “I’m kind of utilizing my platform on Tik Tok to bring it to Gen-Z and younger people. I’m trying to simplify it as much as I can to be able to bring it to people who maybe have never watched tennis before.”

Morgan is Taylor Fritz’s girlfriend and has a background in marketing. She says, the sports world is moving online and utilizing social media is the best way to bring in new fans.

“There are a lot of companies that are also trying to reach the tennis audience or trying to bring people into tennis. I think that I can help companies do that. In just the past two years, there are younger athletic brands that have released tennis lines, something they’ve never done before.”

on a personal mission to make tennis cool again

♬ Send Me on My Way – Vibe Street

To personally connect with a younger audience. Morgan is using Tik Tok to explain the game and showcase the experience of attending a tennis tournament like the BNP Paribas Open.

“At Indian Wells, it’s really like a whole experience here, which I think in other sports you kind of get, but not to the level that you do in tennis.”

♬ Everybody Wants To Rule The World – The Moving Stills

As Morgan continues to promote tennis in the United States with the support of Taylor and the tennis community, she hopes to make more Americans fall in love with the sport.

“I think it was highly talked about in the tennis community,” Fritz says about Morgan’s TikToks. “I think anyone within the community knows that it was very beneficial. Bring a lot of eyes to our sport and maybe bring a lot of younger attention to the things that younger people might find interesting about tennis.”