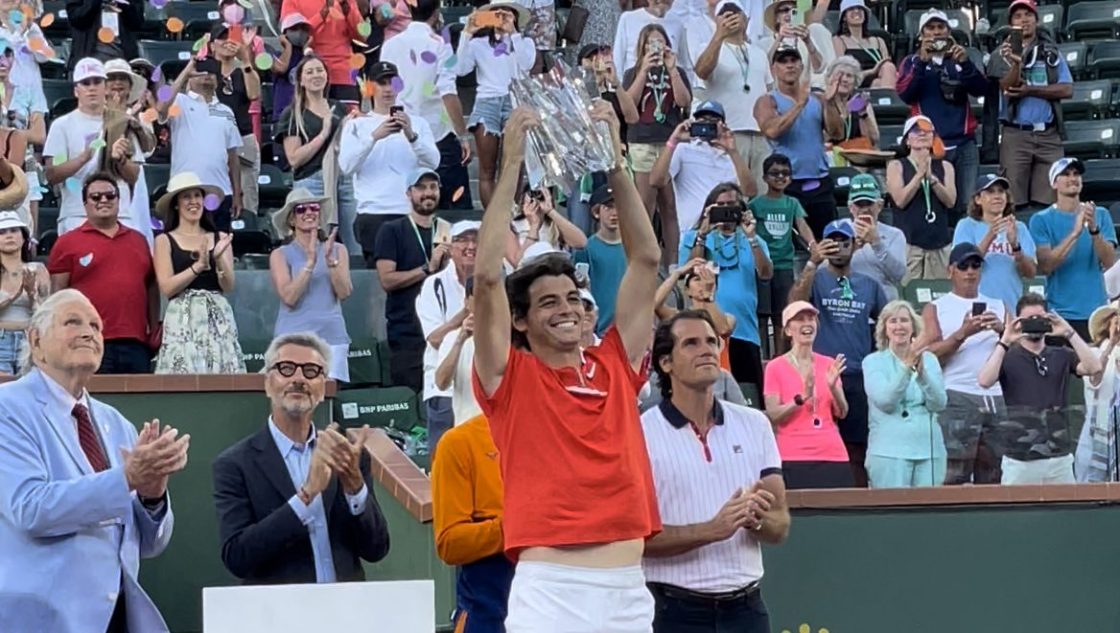 The Southern California boy did it.

Taylor Fritz wins the 2022 BNP Paribas Open men’s singles title after defeating Rafael Nadal in straight sets (6-3, 7-6). Nadal had also been perfect so far in 2022, up until the BNP Paribas Open final match. Nadal’s match record now sits at 20-1 on the year.

“I mean, it’s just doesn’t seem real, seriously like to win a Masters 1000 level and be like, here this is.”

Fritz came out firing in the first set, Nadal fought back towards the end but something seemed to be bothering the 21 grand slam champion. Nadal was nursing a pectoral injury he suffered during his semi-final match against 18-year-old Carlos Alcaraz. At the conclusion of the first set, Nadal called for his doctor and physiologist to check on that injury. After some time, Nadal did come back and put up a fight in the second set, forcing Fritz to win it in a tie break, 7-5.

To Fritz, this win means everything, the San Diego native grew up playing at the Indian Wells Tennis Garden. He has strong ties to the Coachella Valley, his father Guy Fritz is the head coach of the men’s tennis team at College of the Desert.

“This is like seriously one of those childhood dreams that didn’t even seem possible. My dad brought me here when I was a little kid and he told me, he said, ‘You’re gonna win this thing one day’ and it just it seriously just doesn’t seem real.”

A historic win for Fritz and the tournament, he becomes the first American player to win the title since 2001. This is also Fritz’s first masters 1000 win on tour.

“I’ve been obviously fighting back tears the whole time.”

Fritz has a goal of breaking into the top ten ATP rankings by the end of the year, and he is off to a great start after winning his home tournament.

“That was my big goal this year. You know, towards the end of last year, I felt like that was the level I was playing at, so that’s where I set my goal. So yeah, we’re off to a strong start, but it’s a long year, so I gotta keep working.”

On the Women’s side, Iga Swiatek beats Maria Sakkari in straight sets (6-4, 6-1) to win the BNP Paribas Open 2022 women’s singles title. The 20-year-old from Poland fought through tough windy conditions in Indian Wells and persevered to win the title. Sakkari had quite a few unforced errors on her end, the title match was one of her worst performances in the tournament, where she had been dominant for nearly two weeks straight.

“I’m so happy that I’m playing better and better on hard courts than I gained so much confidence for these past two weeks that really, I didn’t really think that this is possible winning two titles in a row. I mean, it’s really crazy, my mind is blown so I can really describe it.”

Fritz and Swiatek win equal prize money of $1.2 million dollars and are crowned the 2022 King and Queen of the desert.