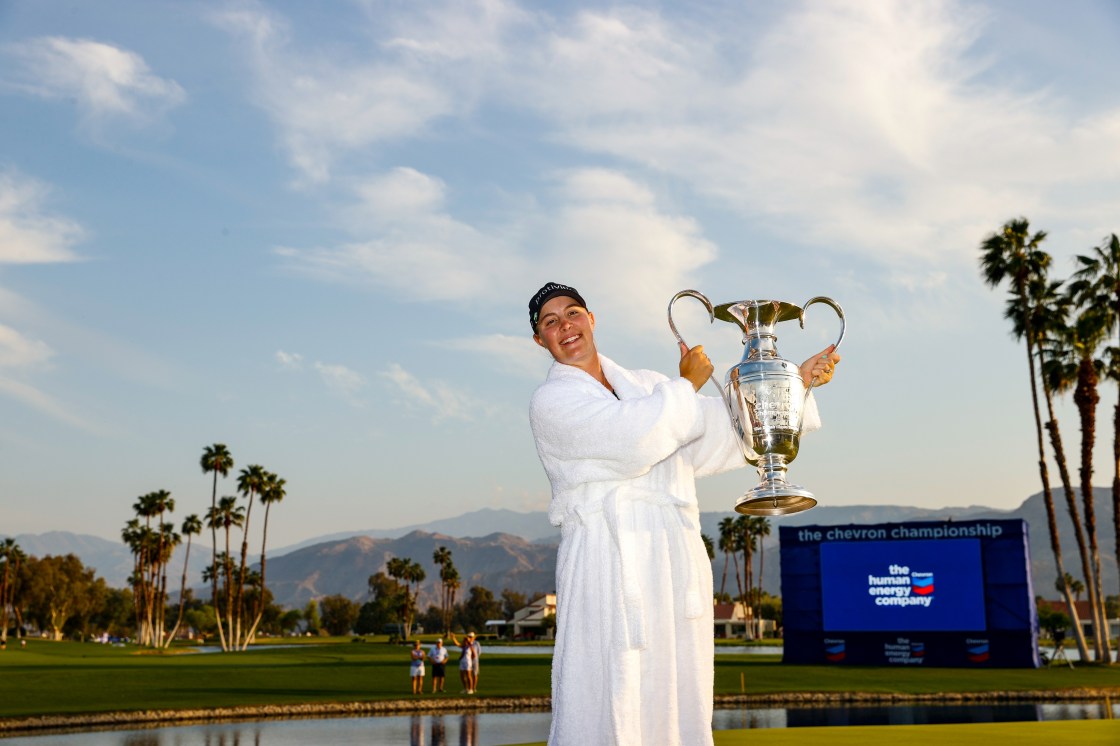 Jennifer Kupcho etches her name in LPGA history in more ways than one after sealing the deal on Sunday at Mission Hills Country Club and taking the final splash into Poppie’s Pond.

The young Colorado native makes ‘Dinah’ the home of her first tour win after maintaining the top of the leaderboard through the weekend. As the 2022 Chevron Championship winner, she not only has her first tour win under her belt, but she can now say she is a Major champion.

Kupcho closed out her final round 2-over for the day, but it would be enough to keep her ahead of the field after her career low of 64 just one day before. Kupcho headed into Sunday with a six-shot lead and although Jessica Korda and others made their best Sunday charges towards the top, it just wouldn’t be enough to catch up to Kupcho.

After being crowned the Chevron Champion, Kupcho said, “I think it’s been one thing that I’ve been struggling with is living in the light of having only won the Augusta National Women’s Amateur and to now be able to say that I’m a major champion. I’ve definitely been wanting to be able to say that for a couple years.”

Her big win in Rancho Mirage came just days ahead of what would mark three years since her win at the first Augusta National Women’s Amateur. Kupcho’s nails were a hot topic this weekend after she said she painted them green in honor of the win at Augusta. Decked out in her Championship robe, Kupcho reflected on her growth since then saying, “So I’ve now moved on to the LPGA stage. And I still love Augusta, but just to be able to say I’m a major champion is really special”

Smiling ear to ear, Kupcho added, “But to come out here and get it done and I can now say that I’ve done it. So it’s really exciting.”

Kupcho has been on tour since 2019, and when asked what she learned about herself this weekend she confidently replied, “I can hit the shots under pressure. Honestly, that’s the biggest thing hit the shots and make the putts.”

She’s also the first American to win the tournament since Brittany Lincicome back in 2015.

Emotions were high for Kupcho, but also for the fans here in the desert, as they say, farewell to the LPGA major tournament that’s been in the Coachella Valley for more than half a century.

Kupcho wouldn’t be the only one to hop into the iconic pond. Amy Alcott, the LPGA trailblazer who started the traditional leap into the pond back, also took one jump to mark the end of an era.

The Chevron Championship is now on its way to the Houston area, but a new home for the tournament has yet to be announced.