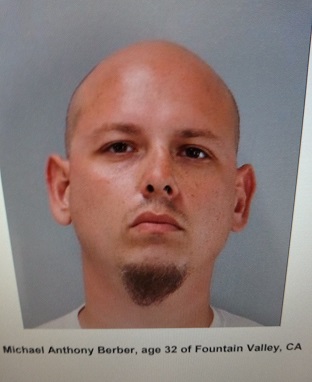 INDIO (CNS) – Felony charges might be filed tomorrow against a 32-year-
old Orange County man suspected of assaulting an Indio police officer and
leading law enforcement on a brief chase that began near the site of the
Coachella Music & Arts Festival.

Michael Anthony Berber of Fountain Valley was arrested and booked into
the Benoit Detention Center in Indio on Saturday on suspicion of assault on
a peace officer, felony evading and second-degree robbery.

Berber is being held in lieu of $500,000 bail, and jail records
indicate that his arraignment window will be Wednesday, if the Riverside County
District Attorney’s Office decides to file charges.

According to the Indio Police Department, at about 10:45 p.m.
Saturday, the suspect was driving in the area of Avenue 48 and Calle Conejo,
just a few blocks north of the Empire Polo Club, where the music festival is
being held, when he allegedly ignored traffic controls, prompting a patrolman
to try to detain him.

Berber disregarded the officer’s orders and struck him with his
vehicle while fleeing the location, police alleged.

“The suspect fled westbound on Avenue 48 and then northbound on
Jefferson Street, while being pursued by Indio police,” according to an agency
statement. “Once the suspect merged onto westbound Interstate 10, California
Highway Patrol took control of the vehicle pursuit with the assistance of Indio
PD.”

Berber stopped a short time later at the intersection of Monterrey
Avenue and Varner Road in neighboring Thousand Palms, according to police.

He was taken into custody without further incident and was not injured.

The officer allegedly struck by the suspect was treated at a hospital
for non-life-threatening injuries and sent home, where he’s expected to make a
fully recovery, according to officials.

Background information on Berber was not available, including the
basis for the robbery allegation.