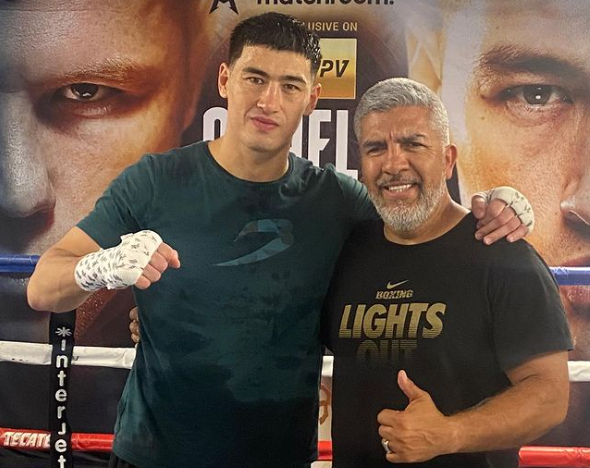 On May 7th, 2022, undefeated Dmitry Bivol (22-0) set out to defend his WBA light heavyweight title against the super middleweight undisputed champion, Canelo Alvarez (57-2-2). Bivol would shock the world and beat Canelo by a unanimous decision, to retain the WBA title.

“I believe my team and you should believe in yourself,” said the two-time world champion after his win.

In one of the biggest fights of his career, Bivol wanted Indio boxing trainer Joel Diaz in his corner.

“They asked me to be part of the team,” says Diaz. “I was wrapping his hands and at the same time, you know, little advice here and there. It was tough for him being away from home, so we made them feel at home. By making him feel comfortable, it built up his confidence, and he went into the ring with the mentality that he believed in his victory.”

Despite holding the WBA light heavyweight title since 2017, Bivol entered this fight against Canelo as the underdog. Diaz says that Bivol was successful because he stuck with their strategy to attack early and keep Canelo at a distance.

“Dmitry was following his instructions really well. At the end of the first round, I saw that Canelo was frustrated, he (Canelo) started off fast trying to wear down Dmitry by getting him tired. By the fourth-fifth round, Canelo tried so hard, using so much strength and power to hurt Dmitry that he ended up getting tired.”

All three judges scored this fight the exact same with seven rounds won by Bivol, and five won by Canelo, which sounds like a close fight, but Diaz believes that it was not that close.

“At the end of the day, they gave Dmitry the win, which was great, but to me, Dmitry Bivol had a larger margin than the scores they gave at the end. With that victory over Canelo, he showed the world who he is, and now they know that he’s a very, very strong and smart fighter in the sport of boxing.”

After helping Bivol secure the belt, Joel Diaz flew back home to Indio to prepare Angel “Tito” Acosta (23-3) for his upcoming bout that following Thursday, May 12th. Acosta was headlining Golden Boy Fight Night at Fantasy Springs & Resort, taking on Janiel Rivera (18-9-3). Acosta is looking to get back in the win column after coming off a nose-crushing TKO loss he suffered against Junto Nakatani (23-0) for the WBO World flyweight title in 2021.

This was Acosta and Diaz’s first full training camp together, and Tito Acosta would get the statement win, defeating Rivera by way of a first-round knockout.

For years, Diaz has trained world-class and champion fighters out of his gym in Indio, California. He has trained boxer Timothy Bradley and has opened his doors to several other world-class fighters like UFC fighter Cub Swanson. Diaz is not new to this, he’s true to this.

“We have three big moments that were similar. Manny Pacquiao vs. Tim Bradley, Timothy Bradley vs. Juan Manuel Márquez, and now Dmitry Bivol vs. Canelo Alvarez.”

Diaz is also currently in camp with Mexican fighter and former world champion, Arely Mucino (31-3-2). Mucino is preparing for a flyweight bout against Marisol Sanchez on the Jaime Mungia vs. D’Mitrius Ballard undercard on June 11th.

“I just keep working, and I just keep generating as many champions as I can.”-