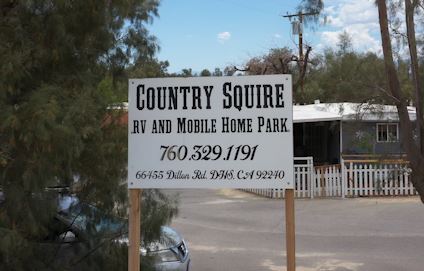 “It’s summer and we don’t know what we are going to do,” resident Maria Aguilar said.

No power and extreme heat.

That’s what some residents of the Country Squire RV and Mobile Home Park in Desert Hot Springs are experiencing right now.

But this problem isn’t new.

“We have problems all the time, every month,” resident Ricardo Sanchez explained. “It’s not like for two minutes or three minutes, it’s for hours. No electricity. It’s crazy.”

This community has been struggling with keeping their power on since April.

Thursday morning, the power shut off once again.

But with temperatures rising, it’s now becoming too dangerous for residents to stay.

“I have a son and I had to take him to my mom’s house because he’s just not safe here,” Aguilar shared.

And they’re not only struggling to keep their homes cool.

“I told her about my refrigerator that my food is going to get wasted and she told me, ‘Well I’m fixing this problem’ but I don’t see any electrician coming to fix this problem,” Aguilar continued.

On top of that, residents are given fluctuating electricity bills.

They say they don’t even know how much energy they are actually using since there isn’t proper metering of their electricity.

But still, they are charged nearly $300 per month.

Now they’ve resorted to powering their air conditioning and refrigerators with extension cords to the main office, but that, they say, is unreliable and dangerous.

“They could catch on fire,” Aguilar said. “It’s not a safe place to be having cables like this on the streets. The manager tells us she’s going to fix it and she just tells her handyman to come and fix it which he did come this morning but in two hours, three hours, it’s going to be happening again. It’s going to keep happening until they start fixing the problem.”

We’ve also reached out to their management to ask them about these issues but we have yet to hear back.