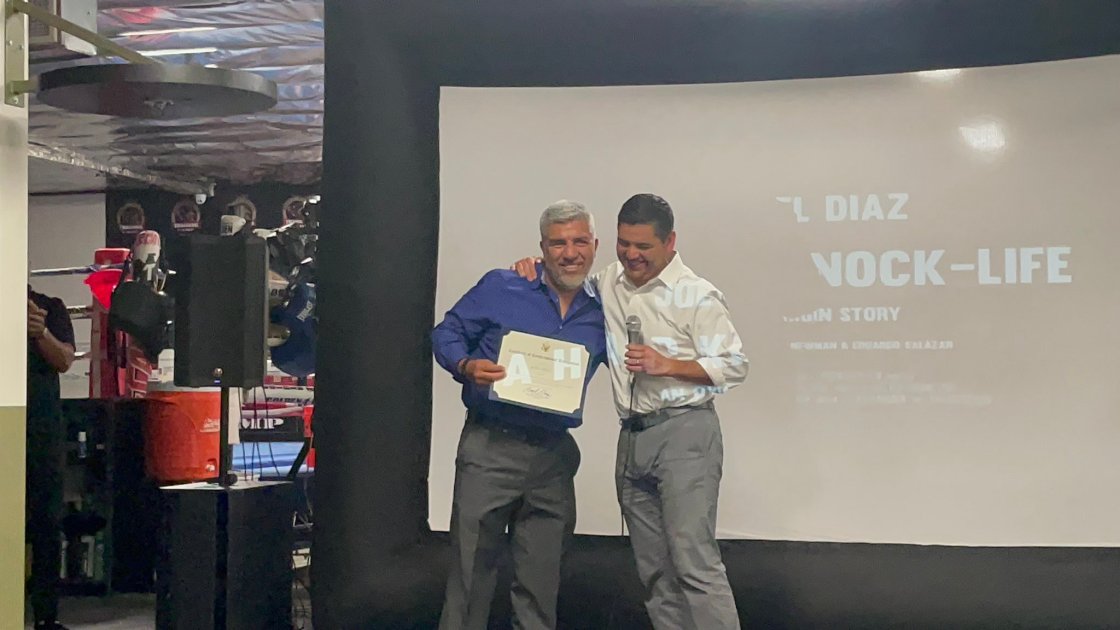 On Saturday, June 18th, NBC Palm Springs had an exclusive first look at a documentary on the life of local boxing trainer, Joel Diaz. The documentary is titled “Joel Diaz: A Hard Knock-Life” and was directed by Jorge Newman and Eduardo Salazar of Newman Studios.

The documentary is co-produced by Joel Diaz, his son, Joel Diaz Jr., along with former UFC fighter & Coachella Valley native, Cub Swanson and his brother, Steve Swanson. The Swanson brothers were trained by Diaz Training Camp and make several cameos in the documentary.

The film not only showcases coach Diaz’s accomplishments as a professional boxer and trainer but also his fight to build a life for himself and his family. It dives into everything from growing up in Coachella to winning world titles with the fighters he trained and a few things in between.

At the screening, coach Diaz was enjoying the moment with his friends and family.

“Honestly, it makes me happy because at one point, you know, life is short. When I’m not here, that’s gonna be a legacy that is gonna stay behind because it’s the story of my life. People want to know who I am, people wanna know how I got to where I’m at, It’s gonna be right there.”

Jorge Newman and Eduardo Salazar are from Cancun, Mexico, and first met Diaz while he was training a boxer for a fight in Mexico. Once they learned about how Diaz built his life in America as a Mexican immigrant, they wanted to know more.

“We knew that he came like from nothing, no connections, no money, and then after that he had troubles and it wasn’t like easy at all for him,” says Jorge Newman. “So, it is something that we really admire, not just as a professional but as a human being and that is why doing the documentary was something like just an achievement because we already wanted to know more about his life.”

Eduardo Salazar hopes that those who watch this documentary are inspired to better their lives, even when times are tough, just like Joel Diaz has done.

“In boxing and in life, it is always better to give than to receive. No matter what obstacles get in the way, you have to find a way to get through the hard times and keep fighting to overcome those obstacles.”

At the screening, were friends and family of Joel Diaz, along with important members of the community, like Congressman Raul Ruiz.

Representative Ruiz and Diaz grew up in the same neighborhood in Coachella and were only a couple of years apart at Coachella Valley High School. On top of supporting his longtime friend, Congressman Ruiz awarded Coach Diaz a Certificate of Congressional Recognition for all the work he has done providing underprivileged kids in the valley with an outlet like boxing.

“To know that a kid from Coachella was coaching, Timothy Bradley and so many others to win world championship belts, it just brought a lot of pride, you know? How he works with the youth, he brings and trains them to show them what it takes to excel in this sport and in life and that is remarkable.”

Click below for an exclusive look at the first trailer for “Joel Diaz: A Hard Knock-Life” by Newman Studios.

The documentary will be available very soon on a streaming platform, no date for release has been specified at this time.