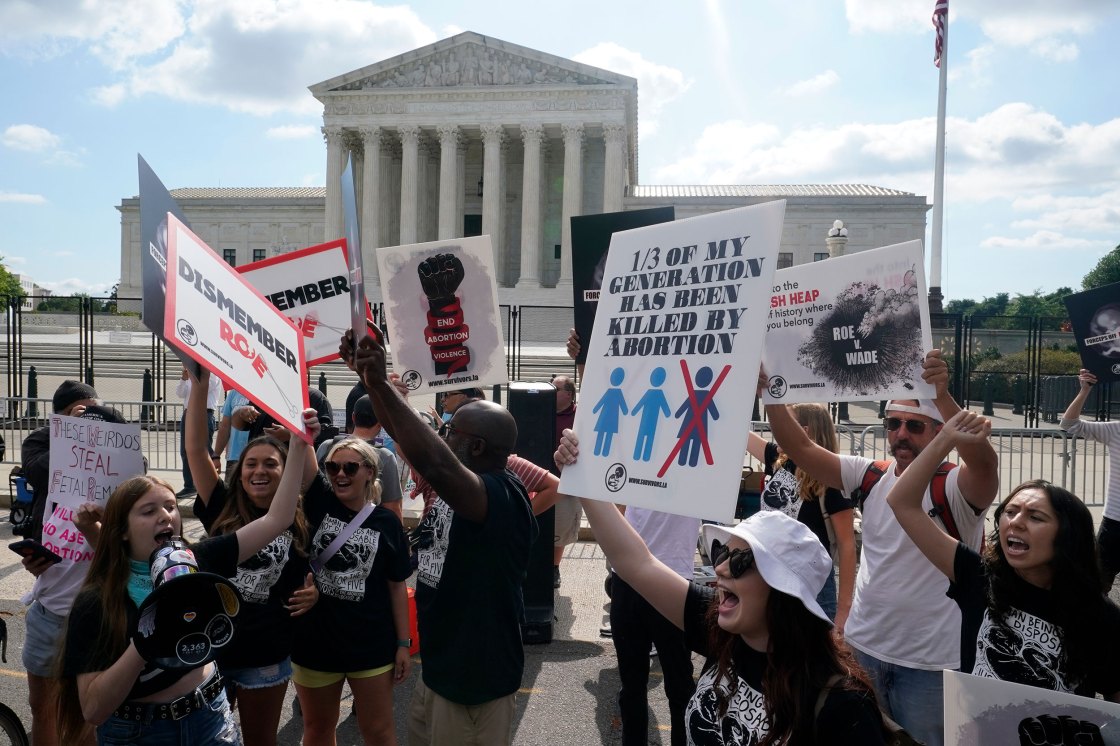 (CNN) — The Supreme Court overturned Roe v. Wade on Friday, holding that there is no longer a federal constitutional right to an abortion.

The opinion is the most consequential Supreme Court decision in decades and will transform the landscape of women’s reproductive health in America.

Going forward, abortion rights will be determined by states, unless Congress acts.  Already, nearly half of the states have or will pass laws that ban abortion while others have enacted strict measures regulating the procedure.

“Roe was egregiously wrong from the start,” Justice Samuel Alito wrote in his majority opinion. “Its reasoning was exceptionally weak, and the decision has had damaging consequences. And far from bringing about a national settlement of the abortion issue, Roe and Casey have enflamed debate and deepened division.”

The vote was 5-3-1. In a joint dissenting opinion, Justices Stephen Breyer, Sonia Sotomayor and Elena Kagan heavily criticized the majority, closing: “With sorrow — for this Court, but more, for the many millions of American women who have today lost a fundamental constitutional protection — we dissent.”

The opinion represents the culmination of a decades-long effort on the part of critics of abortion seeking to return more power to the states.  It was made possible by a solid six-member conservative majority — including three of Donald Trump’s nominees.

At least 21 states have laws or constitutional amendments already in place that would make them certain to attempt to ban abortion as quickly as possible, according to the Guttmacher Institute, which favors abortion rights. And an additional four states are likely to ban abortions as soon as possible without federal protections.

Chief Justice John Roberts did not join the majority, writing in a concurring opinion that he would not have overturned Roe but instead would have only uphold Mississippi’s law banning abortions after 15 weeks.

House Speaker Nancy Pelosi called the ruling “such an insult, a slap in the face to women.”

“There’s no point in saying good morning, because it certainly is not one,” she said. “This morning the radical Supreme Court is eviscerating women’s rights and endangering their health and safety.”

“Today the Republican-controlled courts achieve their dark, extreme goal of repealing a woman’s right to make their own health decisions.”

Former President Barack Obama criticized the decision, saying the high court not only reversed nearly 50 years of precedent but it “relegated the most intensely personal decision someone can make to the whims of politicians and ideologues — attacking the essential freedoms of millions of Americans.”

Former Vice President Mike Pence praised the ruling, saying the high court has given the “American people a new beginning for life” and commended the justices in the majority “having the courage of their convictions.”

“Now that Roe v. Wade has been consigned to the ash heap of history, a new arena in the cause of life has emerged, and it is incumbent on all who cherish the sanctity of life to resolve that we will take the defense of the unborn and the support for women in crisis pregnancy centers to every state in America,” Pence added.

The final opinion was strikingly similar to the draft written by Alito that was leaked earlier this year. It repeats his scornful language towards the original Roe v. Wade decision that enshrined abortion rights.

Like the draft opinion, Alito included a list of cases that also rested on a right to privacy, as Alito asserted that Roe was distinct from those cases.

“What sharply distinguishes the abortion right from the rights recognized in the cases on which Roe and Casey rely is something that both those decisions acknowledged: Abortion destroys what those decisions call ‘potential life’ and what the law at issue in this case regards as the life of an ‘unborn human being,'” Alito wrote, in a line that was also present in the draft.

What’s new is Alito’s response to the dissent, jointly written by the three liberal justices. The dissent would not have been written at the time that the leaked draft was circulated around the court.

“The dissent is very candid that it cannot show that a constitutional right to abortion has any foundation, let alone a ‘deeply rooted’ one, ‘in this Nation’s history and tradition.'” Alito wrote. “The dissent does not identify any pre-Roe authority that supports such a right — no state constitutional provision or statute, no federal or state judicial precedent, not even a scholarly treatise.”

In that four-page section, Alito said that the dissent’s failure “engage with this long tradition is devastating to its position.”

The dissenters said women’s rights are under attack.

“Whatever the exact scope of the coming laws, one result of today’s decision is certain: the curtailment of women’s rights, and of their status as free and equal citizens.”

Friday’s opinion, the dissent said, “says that from the very moment of fertilization, a woman has no rights to speak of.”

“Across a vast array of circumstances, a State will be able to impose its moral choice on a woman and coerce her to give birth to a child,” the liberal justices added.

The dissent also stressed how the decision will impact poor women who now will have to travel in order to obtain the procedure. “Above all others, women lacking financial resources will suffer from today’s decision.”

The dissent also lashed out at Justice Brett Kavanaugh for suggesting that the decision simply returns the abortion question to the states. As the three liberal Justices wrote, “no language in today’s decision stops the Federal Government from prohibiting abortions nationwide, once again from the moment of conception and without exceptions for rape or incest. If that happens,” they explained, throwing Kavanaugh’s words back at him, “‘the views of [an individual State’s] citizens’ will not matter. The challenge for a woman will be to finance a trip not to ‘New York [or] California’ but to Toronto.”

Championed by supporters of abortion and long reviled by critics, Roe v. Wade was decided in 1973 establishing a constitutional right to abortion before fetal viability which most experts say occurs now at around 23-24 weeks of pregnancy. The decision was reaffirmed in 1992, in Planned Parenthood v. Casey.

A majority of the court in that case replaced Roe’s framework with a new standard to determine the validity of laws restricting abortions. The court said that a regulation cannot place an “undue burden” on the right to abortion which is defined as a “substantial obstacle in the path of a woman seeking an abortion before the fetus attains viability.”

Before the court was Mississippi’s Gestational Age Act, passed in 2018 but blocked by two federal courts, which allows abortion after 15 weeks “only in medical emergencies or for severe fetal abnormality” and has no exception for rape or incest. A district court blocked the law, holding that it is in direct violation of Supreme Court precedent legalizing abortion nationwide prior to viability, which can occur at around 23-24 weeks of pregnancy.

A panel of judges on the 5th US Circuit Court of Appeals agreed with the district court holding that in an “unbroken line dating to Roe v. Wade, the Supreme Court’s abortion cases have established (and affirmed and re-affirmed) a woman’s right to choose an abortion before viability.” The court said states may “regulate abortion procedures prior to viability” so long as they do not ban abortion. “The law at issue is a ban,” the court held.

Mississippi appealed the decision to the Supreme Court, and after the justices agreed to hear the case, the state raised the stakes and argued that the justices should not only uphold the law but also invalidate Roe and Casey.

“Roe vs. Wade and Planned Parenthood versus Casey haunt our country,” Stewart said. “They have no basis in the Constitution. They have no home in our history or traditions. They’ve damaged the democratic process. They poison the law. They’ve choked off compromise. For 50 years they’ve kept this court at the center of a political battle that it can never resolve and 50 years on, they stand alone. Nowhere else does this court recognize a right to end a human life.”

Solicitor General Elizabeth Prelogar argued on behalf of the Biden administration in support of the clinics. She urged the justices to uphold precedent and avoid a ruling that would disproportionally harm women who have come to depend upon the decision.

“For a half century, this Court has correctly recognized that the Constitution protects a woman’s fundamental right to decide whether to end a pregnancy before viability,” she argued. “That guarantee, that the state cannot force a woman to carry a pregnancy to term and give birth, has engendered substantial individual and societal reliance. The real-world effects of overruling Roe and Casey would be severe and swift.”

She added: “The court has never revoked a right that is so fundamental to so many Americans and so central to their ability to participate fully and equally in society.

Julie Rikelman, a lawyer for Jackson Women’s Health Organization, the only licensed abortion clinic in Mississippi and Sacheen Carr-Ellis, the clinic’s medical director, told the justices that Mississippi’s ban on abortion “two months before viability” is “flatly unconstitutional under decades of precedent.”

A broad majority of Americans did not want to see Roe vs. Wade overturned, polling taken before the Supreme Court’s decision shows.

In a May CNN poll conducted immediately after the leak of the draft opinion, Americans said, 66% to 34%, that they did not want the Supreme Court to completely overturn its decision. In CNN’s polling dating back to 1989, the share of the public in favor of completely overturning Roe has never risen above 36%.

In the CNN poll, 58% of US adults said that, if Roe were overturned, they’d want their state to set abortion laws that were more permissive than restrictive. About half (51%) said they’d like to see their state become a safe haven for women who wanted abortions but couldn’t get them where they lived.

But not everyone was aware in advance how their own state would be affected. Of Americans living in states with trigger laws to immediately ban abortion after the overturn of Roe, only 45% realized that was the case, according to a Kaiser Family Foundation poll conducted in May. Another 42% living in those states were unsure what the impact of the ruling would be where they live.