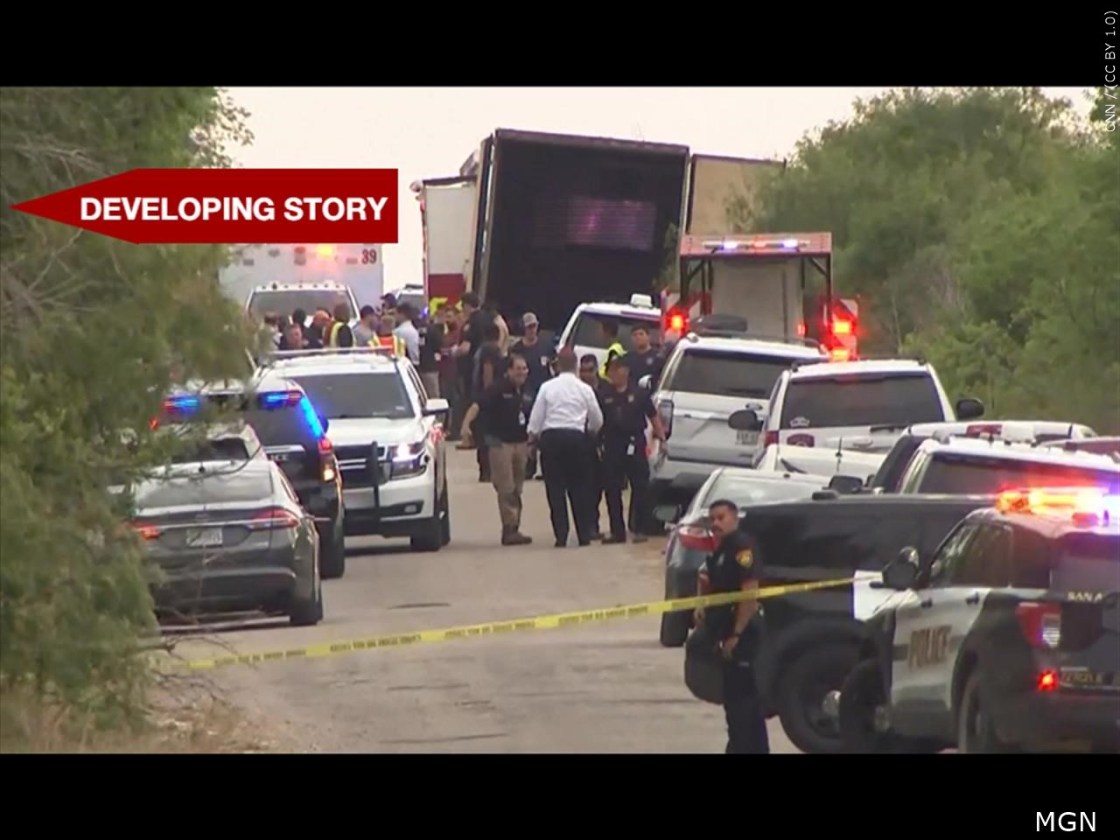 Copy
The death toll rose to 50 Tuesday after more victims died in hospitals following the discovery of a semitractor-trailer in San Antonio, Texas believed to have been full of migrants Monday evening.
Forty-eight people died on the scene, and two died at hospitals, the federal law enforcement official told CNN on Tuesday, noting the toll is preliminary.
On Monday, city fire officials reported the discovery of an abandoned semi-truck where they found 46 dead bodies believed to be of migrants from Mexico, Guatemala and Honduras being smuggled into the United States.
Three people detained away from the trailer site are in police custody, though their connection to the situation is unclear, Police Chief Bill McManus said at a news conference Monday night.
Sixteen people — 12 adults and four children — were taken alive and conscious to medical facilities, San Antonio Fire Chief Charles Hood said at Monday night’s news conference.
Patients were hot to the touch and suffering from heat stroke and exhaustion, Hood said. The refrigerator semitractor-trailer had no visible working air conditioning unit, and there was no sign of water inside, he said. It’s not clear how long people inside the truck had been dead, the official said.
High temperatures Monday in the San Antonio area ranged from the high 90s to low 100s, according to the National Weather Service.

President Biden on Tuesday said the deaths underscore the need to go after criminal trafficking rings.

“Exploiting vulnerable individuals for profit is shameful, as is political grandstanding around tragedy, and my administration will continue to do everything possible to stop human smugglers and traffickers from taking advantage of people who are seeking to enter the United States between ports of entry,” Biden said.

The truck went Monday through a checkpoint north of Laredo, Texas, said US Rep. Henry Cuellar, who represents a district including Laredo and San Antonio, which are about 150 miles apart. Cuellar spoke Tuesday with Homeland Security Secretary Alejandro Mayorkas and has been in touch with US Border Patrol, he told CNN.

–with reports from CNN