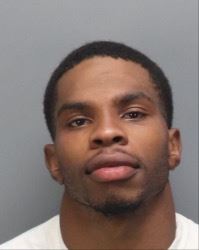 SAN JACINTO (CNS) – A 19-year-old probationer allegedly tried to flee from sheriff’s deputies in a stolen vehicle until he crashed into a traffic signal in San Jacinto, culminating in a brief foot chase and his arrest, authorities said Tuesday.

Lance Brannon Carter Jr. of Los Angeles was arrested and booked into the Smith Correctional Facility in Banning on Monday night on suspicion of auto theft, being a felon in possession of a gun, resisting arrest and hit-and-run resulting in property damage.

According to Riverside County sheriff’s Sgt. Ken Hoon, about 10:30 p.m. Monday, patrol deputies spotted the suspect pulling into a mobile home park in the 1600 block of San Jacinto Avenue and identified the vehicle he was driving as one recently reported stolen out of Riverside.

“The vehicle was stolen … during a residential burglary where multiple items of high-dollar jewelry and firearms were stolen,” Hoon said.

He alleged that when deputies signaled Carter to stop, he floored the vehicle instead.

A pursuit ensued but lasted only a minute or two, ending on Menlo Avenue, where the suspect “lost control and collided with a traffic signal,” the sergeant said.

Carter allegedly tried to run away but was captured within seconds by deputies. No one was injured,  according to Hoon.

Information on the suspect’s prior convictions was not available.