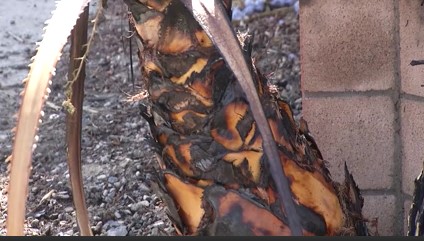 CATHEDRAL CITY (CNS) – Felony charges are expected to be filed Tuesday against a 48-year-old man suspected of starting 10 brush fires in rapid succession in Cathedral City.

Jose Hernandez was arrested Friday morning and booked into the John J. Benoit Detention Center in Indio on suspicion of arson, according to the Cathedral City Police Department.

According to inmate records, Hernandez is slated to appear at the Larson Justice Center in Indio for his arraignment Tuesday.

Officers and fire crews responded Friday to the 68400 block of Dinah Shore Drive to reports of a man starting fires along the road, police said.

All the fires were extinguished by Cathedral City fire crews, and police say there was no threat to any structures or personal property.

Cathedral City police Sgt. Daniel Anes told City News Service that Hernandez had been arrested two weeks ago on suspicion of throwing a rock into Boy’s Hamburgers along Ramon Road. Hernandez pleaded guilty to a vandalism charge last Wednesday and was serving a two-year probation when he was arrested Friday for allegedly starting the brush fires, authorities said.

Man Arrested On Suspicion of Starting 10 Fires in Cathedral City