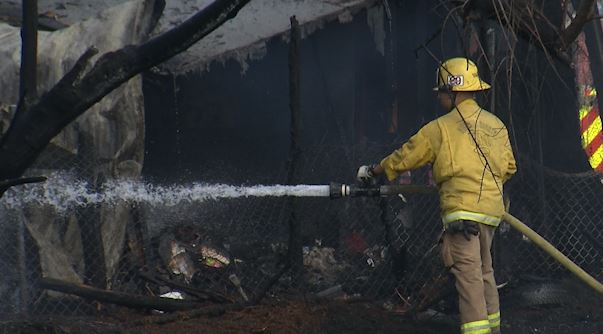 The Country Squire Mobile Home Park has had problems with electricity going off and on.

“I’m not sure. We just want to get somewhere to sleep,” a resident said.

Now, two homes are destroyed and two families in need.

“I just tried to get everyone out. You know, I didn’t even think about anything else,” she continued.

This resident who lost her home didn’t want to share her name, but she wanted to explain her experience when the flames broke out early Thursday morning.

“I’m sleeping and my little brother always wakes up before me,” she explained. “He always comes to my room crying and I always comfort him. I gave him my phone so he’s not bored and he starts hearing something. I’m like, it sounds like when a cat is walking on the roof. I tell him, ‘Oh, no, it’s okay. It’s just a cat.’”

But then, they hear the sound again.

“I look out the window, and I see all this smoke,” she said. “I look to the side and I see this huge fire. My heart drops and I go to wake up my little sister. I’m like, ‘Wake up, there’s a fire outside!’ She got up so quick. Then I go to my brother’s room. I wake him up and he wakes up pretty fast. So, we all got out of the house. The fire wasn’t too big yet, and as soon as we got out of the house, it already took over my room. It was crazy.”

CAL FIRE responded to the fire at around 8:30 a.m. and were able to contain it to two mobile homes and surrounding trees.

First, they struggle to keep their power on long enough to cool their homes.

Now, two of those homes are gone.

“You see the firefighters going to someone’s house and when you see them, just rushing through the street, you’re like, ‘Oh my God, I feel bad for those people who have that problem.’ You never think that it’s your house that they’re going to. It’s crazy,” she said.

The cause of the fire is still under investigation and no injuries were reported.

The family who lost their home believes it started from the generator which was used to cool their home.