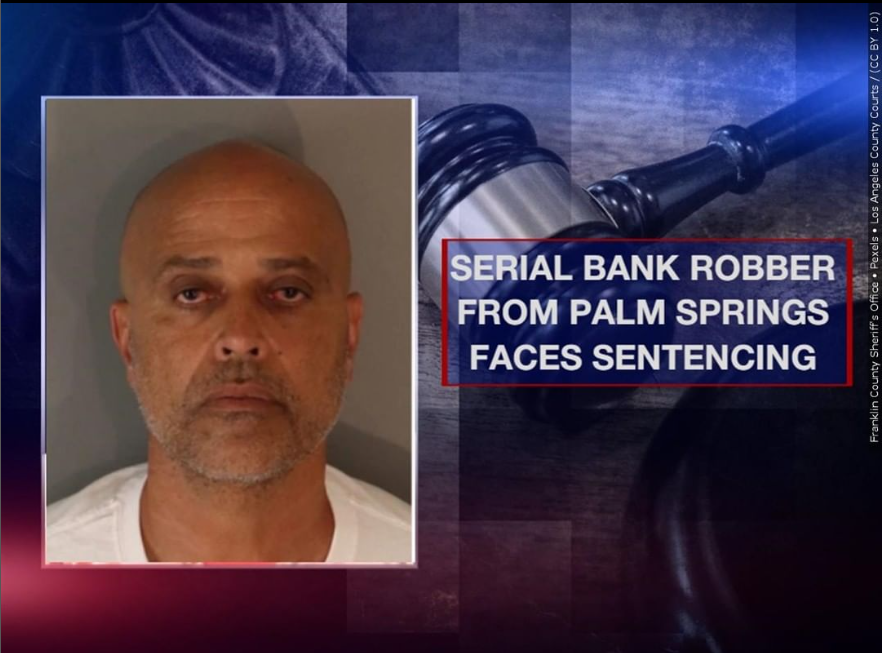 PALM SPRINGS (CNS) – A serial bank robber from Palm Springs who
federal prosecutors say took great joy in his crimes, yelling “John Dillinger
lives!” and “Bikers rule, baby!” during his heists, faces more than two
decades behind bars when he is sentenced today in Los Angeles.

Todd Cannady, 61, pleaded guilty last year in Los Angeles to charges
of armed bank robbery and using a firearm during a crime of violence for
robbing nine banks in Southern California over a two-year period, according to
the U.S. Attorney’s Office.

During a July 1, 2021, stickup of a Chase Bank branch in Jurupa
Valley, Cannady “pressed a black Glock-style 9mm semi-automatic pistol to a
teller’s back, and forced her and other tellers to fill a duffle bag with money
from the bank — just as he had done throughout his life, during limited
periods of non-incarceration,” according to the government’s sentencing
papers.

He then left the bank and led police officers on a high-speed chase,
hitting multiple vehicles before crashing.

The series of “compulsory” heists took place after Cannady served
nearly 22 years in federal prison for the 1992 armed robbery of a bank in
Corona, federal prosecutors said.

Prior to that conviction, Cannady was found guilty in 1982 of armed
robbery for robbing nine different people at gunpoint in various stores
throughout Los Angeles in a single month. In 1987, he committed his first bank
robbery in which he threatened a teller with a firearm.

Prosecutors are asking that U.S. District Judge Stanley Blumenfeld Jr.
sentence Cannady to about 22 years in federal prison. The defendant’s
attorney did not immediately respond to a request for comment.

From 1982 to 2021, Cannady committed armed robberies whenever he was
not incarcerated — and did so “at great economic expense to individuals and
institutions and great emotional expense to the tens of victims he traumatized
in each robbery and at each bank,” federal prosecutors wrote.

In spite of the harm he caused, Cannady seemingly “took great joy”
in his crimes, yelling “Bikers rule, baby!” during one of his many armed bank
heists in 1993 and “John Dillinger lives!” during a 2019 robbery, according
to the U.S. Attorney’s Office.

He continued to commit armed robberies even after obtaining almost
$760,000 from holdups during 2019 to 2021, once robbing the same bank twice,
six months apart, court records show.

Cannady’s “enjoyment, predilection, and compulsion” to rob is
reflected in the fact that, despite being incarcerated for more than half of
the last 40 years, he has managed to rob at least 12 banks, nine individuals
and various stores during short periods of freedom.

“Even when incarcerated, over the course of four decades, defendant
has consistently shown one thing: when he is not incarcerated — and sometimes
even when he is — he will commit violent crimes at a prolific rate,”
according to the government. “This history suggests that the only method of
specific deterrence and to protect the public from further crimes of the
defendant is to remove him from society.”