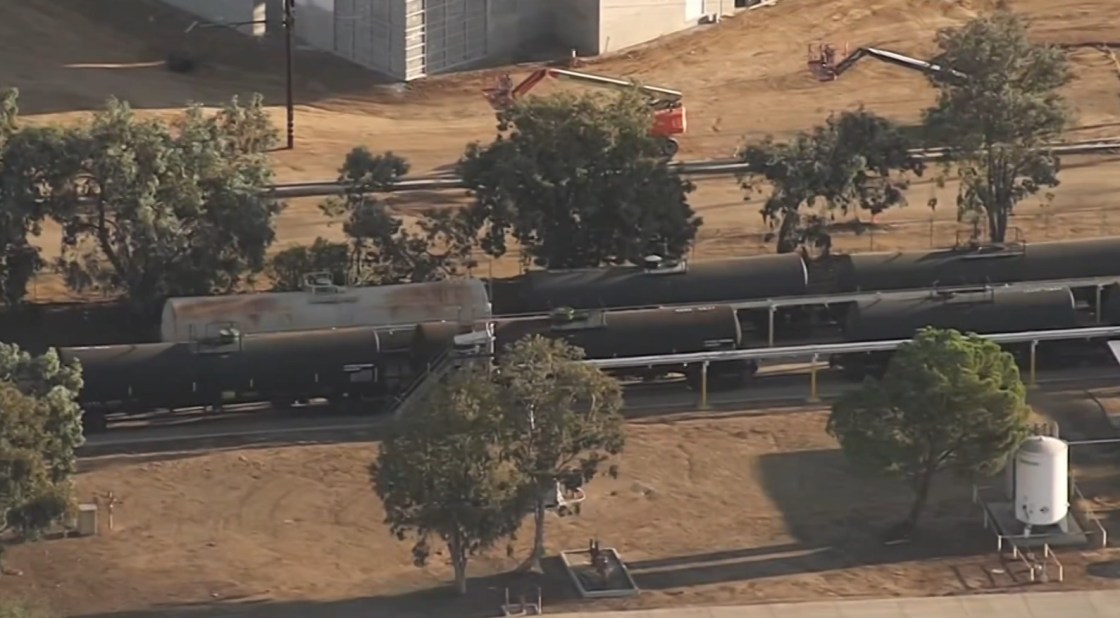 PERRIS (CNS) – Hundreds of residents near Perris remained evacuated today and a major freeway was closed as fire officials monitored a rail car that began leaking a hazardous chemical for unknown reasons, and which could
potentially explode if the material overheats.

Authorities said the situation could extend for as many as three days due to the hazardous nature of the styrene chemical in the damaged rail car.

The spill at Harvill and Oleander avenues was first reported around 7:30 p.m. Thursday and led to the closure of the 215 Freeway south of Van Buren and north of Ramona Expressway, according to the Riverside County Fire
Department.

Harvill Road was closed, and evacuations were ordered in an area north of Markham Street, east of Donna Lane, south of Nandina Avenue and west of Patterson Avenue, the fire department reported.

Authorities said roughly 170 residences and businesses were evacuated within a roughly half-mile radius of the leaking rail car.

“This could resolve itself in two days, but it could get worse before it gets better,” Cal Fire Division Chief John Crater said at a news conference Friday morning.  “They’ve also said due to the heat building in the
car, that builds pressure and it could have a release, meaning some sort of violent explosion. That’s why we’re taking an abundance of caution with this.”

Temperatures are expected to reach nearly triple-digits in the Perris area Friday.

On the flip side, if the rail car begins to cool, it will mitigate the explosion risk. However, that process could take days.

“Once we start seeing that that rail car is actually cooling, what that tells us is the chemical reaction that’s happening in that car is actually now starting to solidify, which is the trend we want to see happening,” county
Fire Department Capt. Oscar Torres said.

An evacuation center for those affected by the spill was opened at Pinacate Middle School, 1990 S. A St., in Perris.

Due to the unstable nature of the chemical, authorities are unable to get near the car, and they’ve been using drones to get closer looks.

Metrolink service on the 91/Perris Valley line was also interrupted through the area, with the tracks closed between the Perris-Downtown and Moreno Valley/March Field stations. Service will remain disrupted until the situation
is resolved.