Charges Filed Against Man Suspected of Burglary in Palm Desert 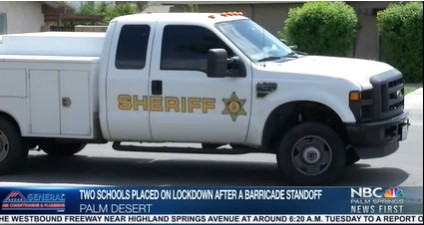 (CNS) – Felony charges were filed Thursday against a 38-year-old man accused of breaking into a home in Palm Desert.

Steven Eric Cunningham of Palm Desert was charged with three felony counts of burglary, possession of an assault weapon and possessing a firearm with a temporary restraining order, according to court records. He was also charged with two misdemeanor counts of disobeying a court order and possessing controlled substances.

He was scheduled to be arraigned at the Larson Justice Center in Indio Thursday afternoon.

Cunningham allegedly forced his way into a residence on Tuesday, shortly after 5 a.m., in the 74-400 block of Santolina Drive, according to the Riverside County Sheriff’s Department.

Homeowners allegedly confronted Cunningham and he ran to his own residence nearby. Deputies responded to the home, but he refused to come out, setting off an hourslong standoff.

He eventually exited the home and was booked into the John J. Benoit Detention Center in Indio, authorities said.