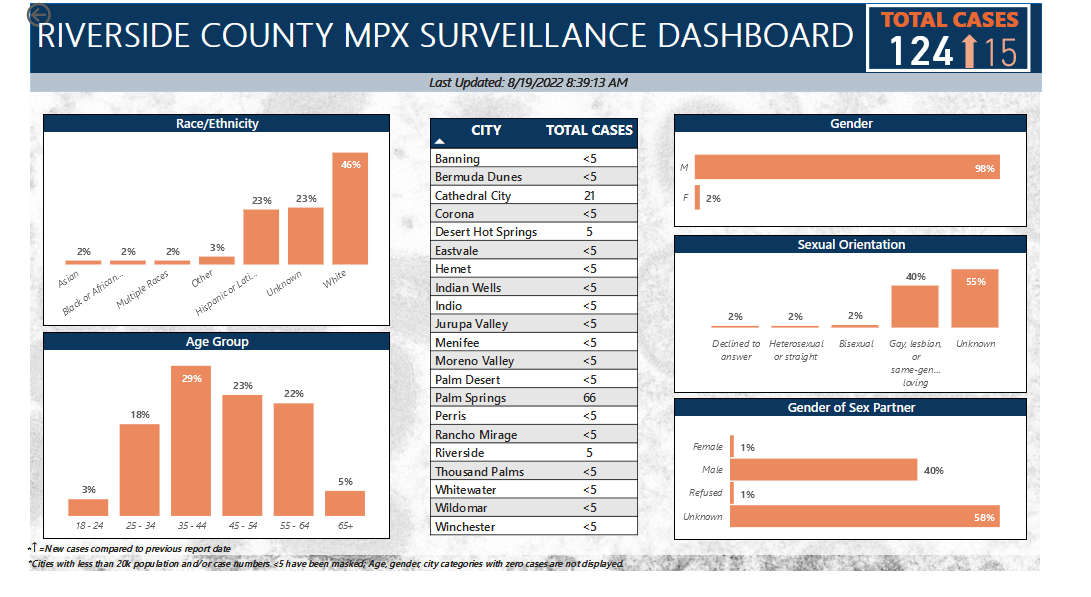 Jose Arballo, a spokesman for the Riverside University Health System, provided the updated numbers with a monkeypox dashboard that shares the breakdown of cases in the county with city-by-city data and more.

As of Friday, a total of 66 probable or confirmed monkeypox cases were reported in Palm Springs, making up almost half of the county’s aggregate count of 124, according to the latest RUHS data.

The first probable or confirmed case in a female was reported on Tuesday.

Last Friday, Arballo reported the total probable/confirmed cases stood at 78, up from 51 the previous week. Two cases originally reported in Riverside County have since been assigned to San Bernardino County.

Riverside County Public Health Officer Geoffrey Leung signed a public health emergency proclamation last week in an effort to focus attention on the virus, and the county Board of Supervisors ratified the proclamation Monday.

He said the county received 3,514 doses of the two-dose JYNNEOS monkeypox vaccine, enough for about 1,750 people, before the 75% was distributed to the Coachella Valley.

The other 25% was kept for RUHS efforts such as larger scale events and post-exposure prophylaxis, Arballo said.

The county is also working with community partners to expand eligibility for the two-shot vaccines to include at-risk individuals, and to set up treatment sites with Tecovirimat — an antiviral medication used to treat orthopoxvirus infections such as monkeypox.

As of Thursday, a total of 2,663 monkeypox cases were confirmed in California — the second-highest of any state, behind New York’s 2,744 — while nationwide, the aggregate count was at 14,115, according to the latest CDC data.