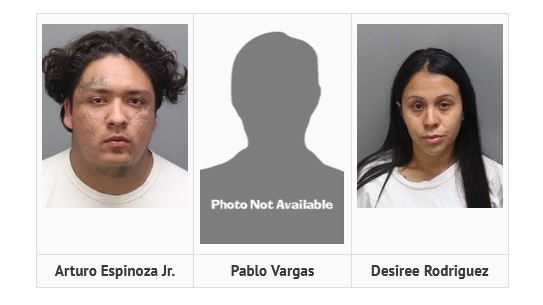 (CNS) – Three Coachella residents were behind bars Friday — one for allegedly shooting a man — all of them for possessing what was believed to be a pound of methamphetamine.

Espinoza and Vargas are both documented criminal street gang members, according to the department.

Officers from the Coachella Valley Violent Crime Gang Task Force searched a residence in the 1000 block of North State Street in Hemet around 9 p.m. Thursday as part of an investigation into an attempted homicide that occurred on Monday in Coachella, in which a man was found with multiple gunshot wounds to his chest and neck, Heredia said. There was no further information about the gunshot victim.

During the search of the home, officers allegedly found one pound of suspected methamphetamine, he said.

Jail records indicate that the suspects were booked into the Larry D. Smith Correctional Facility in Banning and were each being held on $50,000 bail.