Remembrance Service Set for Saturday to Honor the `Fallen 13′ 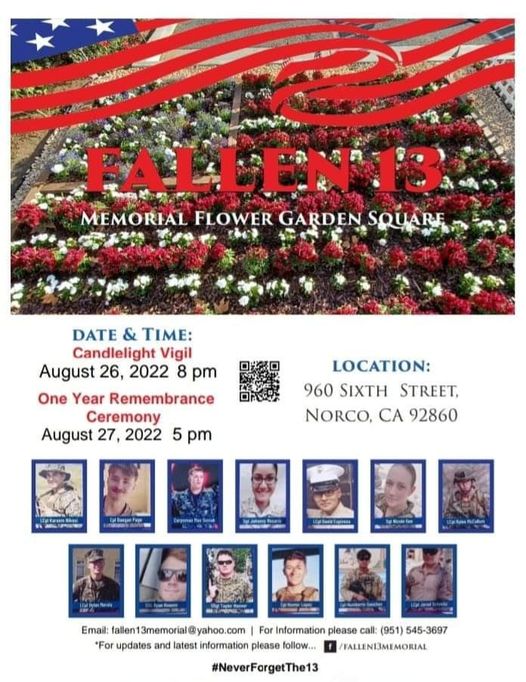 (CNS) – A remembrance service is scheduled Saturday in Norco to honor the 11 U.S. Marines and two other service members killed in a suicide bombing during the chaotic evacuation of American forces and civilians from Afghanistan a year ago.

The ceremony will begin with a mission rendezvous in the Outlets at San Clemente parking lot on West Avenida Vista Hermosa about 2 p.m. Saturday.

According to organizers, the goal is to gather groups for a highway “cruise” from San Clemente that will travel across multiple streets and freeways for the trip to Norco, with flags, banners and other insignia marking the anniversary of the “Fallen 13.”

“This cruise is for the one-year mark, and we need not to be afraid to say their names,” according to an announcement released Tuesday. “The administration let down so many families on this day. Please join us. The bigger the group, the better.”

One of the remembrance service organizers is Shana Chappell of Norco, who lost her son, 20-year-old Marine Lance Cpl. Kareem Nikoui, in the Aug. 26, 2021, bombing by an Islamic State terrorist at the Abbey Gate fronting Kabul Airport.

Along with the Marines, a U.S. Navy corpsman and a U.S. Army soldier were killed, while nearly 100 civilians were killed or injured in the blast.

Chappell, who has been sharply critical of the Biden administration’s handling of the U.S. Armed Forces’ exit from Afghanistan, is also mourning the loss of her other son, 28-year-old Dakota Halverson, who committed suicide a week ago at Pikes Peak Park, near his fallen brother’s memorial.

“He was still having a hard time believing (his brother) was actually gone,” she said in a Facebook post. “He’d sneak into the cemetery at night and sleep on Kareem’s resting place. I was so wrapped up in my own grief that I couldn’t see all the signs that were there!”

Nikoui was one of two Riverside County natives killed in the bombing. The other was 22-year-old Marine Cpl. Hunter Lopez of Indio.

According to organizers, a contingent of leathernecks from Marine Corps Air-Ground Combat Center Twentynine Palms is slated to join the caravan Saturday from San Clemente to Norco.

“Along with invited families, some service members who were present at the Abbey Gate will be in attendance,” organizers said. “There will be singers, speakers and more.”

The remembrance service is planned at 5 p.m. adjacent to the Memorial for the Fallen 13 in the Norco Country Center, 960 Sixth St.

The memorial features a plaque saluting Nikoui as “Our Home Town Hero.”

More information is available at http://www.Fallen13Memorial.com.