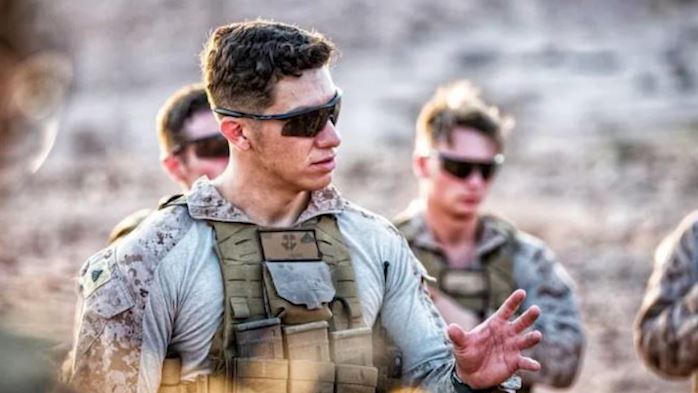 A hero was lost.

“It just kind of just feels like it’s only been a week of all this happening,” Alicia Lopez, Hunter’s mother, shared.

“The year obviously has been challenging, you know, it’s a spot where none of us ever thought we’d be in,” Hunter’s father, Herman Lopez, said. “Everybody says that you never thought it would happen to you, and until you’re in that position. And so that’s exactly the spot we’re in.”

A courageous life taken too soon.

But even in his 22 years, Hunter did more than what many do in their entire lifetime.

“Not everybody goes and signs on the dotted line and stands guard and to protect our nation,” Alicia said. “There was never a medium for him. It was always nothing or all. When he was a Marine, he wanted to make sure everybody came home. He didn’t want to be the reason why people didn’t come home. So he trained hard and made sure that everybody was able to come home.”

An All American kid dedicated to giving back.

Even at a young age, he knew what he wanted to do: enlist in the Marines and join the ranks of the Riverside County Sheriff’s Department.

“His mind was like, ‘No. If I’m gonna do something, I’m gonna do the one that has the reputation of being the toughest branch,’ Herman shared. “So, he enlisted in the Marine Corps. He was a kid that had a plan for his life. He had a plan to finish school, enlist and do a service to the country, and then go on to be a sheriff’s deputy. He still was a kid that loves to have fun. He was one of the people that got our family together and friends together. He was the person that united everyone.”

Herman continued, “The foundation is Hunter Lopez Memorial Foundation. Years ago, when Hunter graduated from the Marine Corps boot camp, one of the things that he saw was some Marines didn’t have any family with them to celebrate that very momentous occasion. So what the foundation does is sponsor families to attend their son’s graduation from boot camp. So today, we’ve been able to help several families from as far away as Texas, Puerto Rico and Chicago.”

All in memory of one brave soul with wisdom beyond his years, Corporal Hunter Lopez.

“That was my kid,” Alicia said with tears in her eyes. “He did a lot of things for people that we had no clue he had done till after he passed away. So, just be kind to one another. Treat everybody with respect and do nice things for other people, even when nobody’s watching.”

The foundation has also provided several service dogs to military members and given awards to students at local elementary and middle schools.

The Lopez family is hosting a candlelight vigil Friday night at 7 p.m.

It is open to the public and will be located at the La Quinta Civic Center campus.