Witness: Alleged Theater Shooter Was `Staring Like He Wanted to Punch Us’ 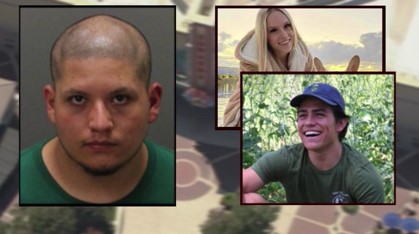 (CNS) – A 21-year-old man accused of fatally shooting a couple on a date at a Corona movie theater was behaving strangely on the night of the attack, staring intensely at his friends and talking to himself as they all sat together during the film, prompting them to “ditch him,” a witness testified Friday.

“We wanted to leave him,” Julian Velasquez said of Joseph Jimenez during a preliminary hearing at the Riverside Hall of Justice. “He was making us uncomfortable.”

Jimenez is charged with two counts of first-degree murder, special circumstance allegations of lying in wait and taking multiple lives in the same crime, as well as sentence-enhancing gun and great bodily injury allegations, for gunning down Anthony Barajas, 19, and Rylee Goodrich, 18, both of Corona, last year at the Regal Edwards Theater.

The defendant pleaded not guilty by reason of insanity. The preliminary hearing will determine whether there’s sufficient evidence to warrant a trial. The hearing was slated to conclude late Friday afternoon.

Velasquez testified that on the night of July 26, 2021, he and two other friends, identified as “Ramon” and “Carlos,” invited Jimenez to join them for dinner at a Corona restaurant before they all headed over to the theater to see “The Forever Purge,” a horror film about societal collapse.

Velasquez said the recent Santiago High School graduates had been close at one time, but Jimenez had “changed drastically” after the loss of his mother a year earlier. The witness recalled how the defendant would wander off as he and the others tried to engage him in conversation, or how he would sometimes blurt out irrelevant phrases, murmur to himself and stare into space.

Velasquez admitted growing tired of trying to “babysit” Jimenez, but the witness and his friends wanted to attempt to include him in their camaraderie, so they invited him to dinner and to watch the film.

While dining, the defendant was already adrift, looking at a wall and murmuring incoherently, before leaving the restaurant and disappearing, according to Velasquez.

He said they didn’t see Jimenez until 40 minutes later, when he parked outside the Regal Edwards Theater. Velasquez noticed Jimenez carrying a backpack and told him he couldn’t bring it into the theater, so the defendant put it back in his car.

“He was quiet at first, but he got stranger as the movie continued,” the witness said. “He kept staring at us, making us uncomfortable. He was staring at us like he wanted to punch us in the face. That type of stare.”

Jimenez was also talking to himself, and at one point, Velasquez said he clearly heard the defendant say, “I can’t do that to them; they’re my friends.”

Within a few minutes of the movie starting, Jimenez left and retrieved the backpack from his car, then returned and sat back down, the witness said. In the row ahead of him sat Barajas and Goodrich. Velasquez testified that there was no interaction between any of them and the victims. No one else was in the theater for the late-night showing.

Velasquez said he asked Jimenez what was in the backpack, and Jimenez replied, “a strap,” which the witness took to mean “a pistol.” He said he didn’t look in the bag, but picked it up and passed it to his friends, in a kind of “keep-away” effort, concerned what Jimenez might do with the contents. However, the defendant finally took back possession of the backpack.

Velasquez said he, Ramon and Carlos indicated they were going to the restroom, but instead left the theater.

“We wanted to ditch him,” the witness recalled. “We talked, saying he’s being weird and we’re not going to hang out with him.”

The following morning, Velasquez and the others learned of the shooting. After agreeing that Jimenez was most likely the shooter, Velasquez contacted police.

A search warrant was served within 48 hours of the killings at a residence in the 19000 block of Envoy Avenue, near Diamond Street in El Cerrito, where Jimenez was arrested and a handgun was seized, according to the Corona Police Department.

Jimenez divulged in a jailhouse interview with a newspaper shortly after the killings that he had been tormented by voices and had been diagnosed with schizophrenia but had stopped taking his medication.

He’s being held without bail at the Smith Correctional Facility in Banning.

He has no documented prior felony or misdemeanor convictions.