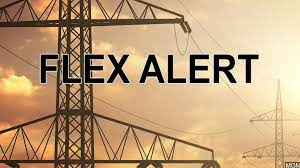 (CNS) – For the sixth straight day, a Flex Alert will be in effect Monday seeking voluntary power conservation and increasing the hours users are asked to reduce strain on the state’s electrical grid while near triple-digit temperatures continue to drive up air conditioner use.

The California Independent System Operator — which manages the state’s power grid — issued the first Flex Alert of the week on Wednesday, urging residents to reduce electricity during peak hours, initially designated as 4 to 9 p.m. Additional Flex Alerts had been issued for the same hours each day since Wednesday.

An excessive heat warning has been extended through at least 8 p.m. Friday in the Inland Empire.

The alerts have worked thus far, with the state avoiding involuntary power cutoffs.

According to Cal-ISO, electrical demand on Thursday topped out at 47,357 megawatts, the highest figure since September 2017. The agency projected that demand could exceed that number on Sunday, Monday and Tuesday, with Tuesday’s forecast at 49,000 megawatts.

“The ISO is working with state agencies and market participants to bring all available energy resources online for what are expected to be the most challenging days of the heat wave,” according to Cal-ISO.

Cal-ISO has warned that more Flex Alerts are likely to be posted during the duration of the heat wave, which is expected to linger until at least Tuesday, possibly longer in some areas.

High temperatures during Monday’s Labor Day holiday are expected to reach 110 in Hemet, 114 in Palm Springs and 110 in downtown Riverside, according to the National Weather Service.

The oppressive heat is expected to linger for most of the week, with temperatures dropping slightly Friday before becoming significantly coolier by Saturday.

“Extreme heat will significantly increase the potential for heat- related illnesses, particularly for those working or participating in outdoor activities,” the NWS said.