Deadly Fire Southeast of Hemet Grows to More Than 27,000 Acres 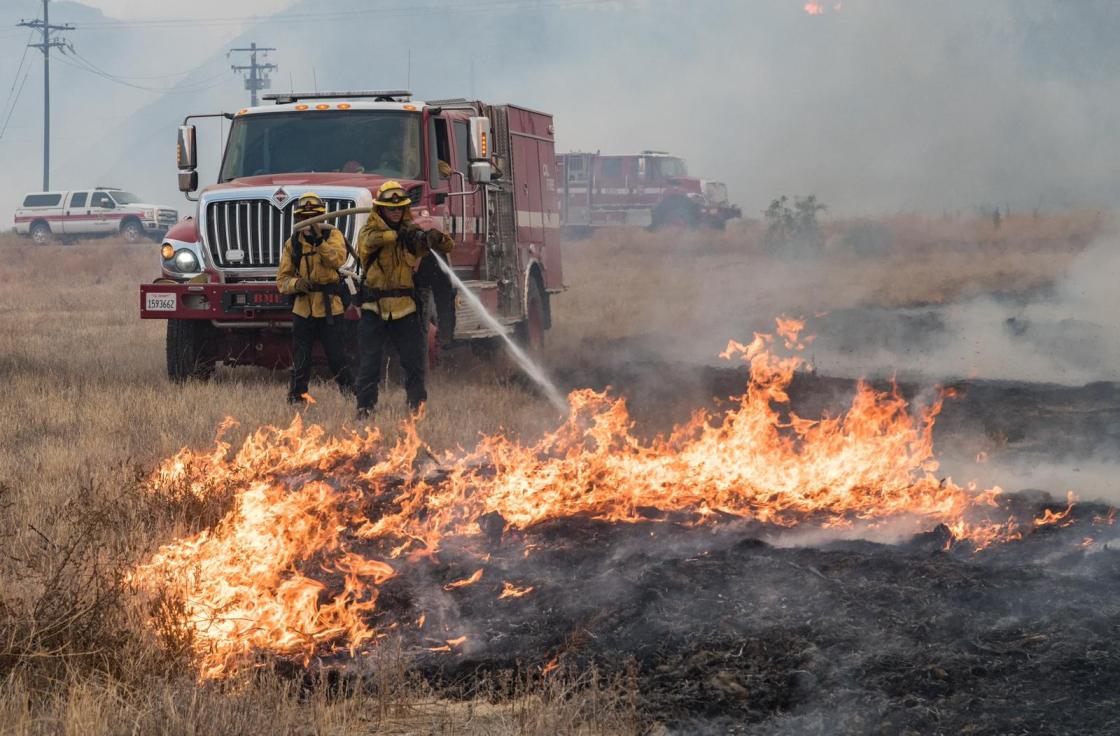 (CNS) – Heavy rain and strong winds from an incoming storm Friday are expected to create dangerous conditions countywide, affecting the areas around the Fairview Fire near Hemet in particular.

The National Weather Service has issued a flood watch and high wind warning starting Friday for Riverside County. The NWS predicts up to 7 inches of rain in areas of Riverside County, which could create flash floods and mud and debris flows. Forecasters say the areas most susceptible areas include the Coachella Valley and recent burn areas.

“Based on forecasts, this appears to be a dangerous storm. We want the public to prepare now,” said Bruce Banton, director of the Emergency Management Department in Riverside County. “If you encounter a road that’s flooded, never try to walk or drive through it.”

Sandbags are available at fire stations and hardware stores in Riverside County.

Additional evacuations have been ordered on the front lines of the deadly Fairview Fire southeast of Hemet, but expanding at a slower rate, with containment possible early next week.

At 1 p.m. Thursday, Cal Fire announced that the area east of De Portola Road, west of Sage Road, north of East Benton Road and south of Diamond Valley Road was under a mandatory evacuation.

Around the same time, a new evacuation warning was posted south of Rawson Road, east of Washington Street and Anza Road, west of Highway 74 and north of Highways 79 and 371, where residents were advised to be prepared to leave should conditions change for the worse.

Other evacuation warnings were active for those living west of Reed Valley Road and west of the USFS boundary, south of Stanley and north of Wilson Valley Road.

Highway 74 in the San Bernardino National Forest was fully closed between Mountain Center and Borco Street, which is in Valle Vista.

Officials said Wednesday night the goal is to have containment lines completely around the fire by Monday.

Cal Fire established unified command with the USFS, and Janssen expressed hope Wednesday the realignment would allow crews to get a better handle on the fire.

The Riverside County Emergency Management Department declared a local emergency Wednesday due to the fire, enabling the county to apply for federal and state relief. The Board of Supervisors is slated to formally approve the proclamation during its meeting Tuesday. Gov. Gavin Newsom declared a state of emergency covering the fire zone earlier this week.

The South Coast Air Quality Management District extended smoke advisories to 6 p.m. Friday because of the layers emanating from the Fairview Fire. The agency advised people in sensitive health to take precautions wherever drift smoke or ash is present.

Multiple Cal Fire air tankers and water-dropping helicopters were making runs on the fire. A temporary flight restriction was established directly over the fire, barring civilian aircraft from coming within a 15-mile ring, from Hemet to Lake Hemet, well inside the San Bernardino National Forest.

Officials said the fire resulted in two civilian fatalities and one civilian burn injury. Sheriff’s officials confirmed Wednesday the two deceased victims were found inside a vehicle in the 42400 block of Avery Canyon Road in East Hemet Monday, apparently overcome by the flames while trying to leave.

The two victims have not been formally identified by authorities, but friends identified them to reporters as Ian Compton and his autistic daughter Mikayla Porter. Friends said their family pets were also killed. Compton’s wife, Tina, was severely burned and remains hospitalized.

A sheriff’s official said Wednesday the woman, who was found outside the vehicle on Avery Canyon Road, is expected to survive. A GoFundMe page established on behalf of the Compton family had raised more than $11,000 as of Thursday morning.

At least seven buildings have been destroyed and several more were damaged. Friends said the Comptons’ home was among the structures destroyed.

More than 1,500 homes were affected by the evacuation orders earlier Tuesday. It was unclear how many more were added to the total with continued expansions of the evacuation zone.

An evacuation center was set up at Tahquitz High School in Hemet.

The Department of Animal Services said the San Jacinto Valley Animal Campus was accepting large and small domestic creatures, including livestock, for safekeeping.

All fees for retaining pets will be waived under the county emergency order, agency spokesman John Welsh said.