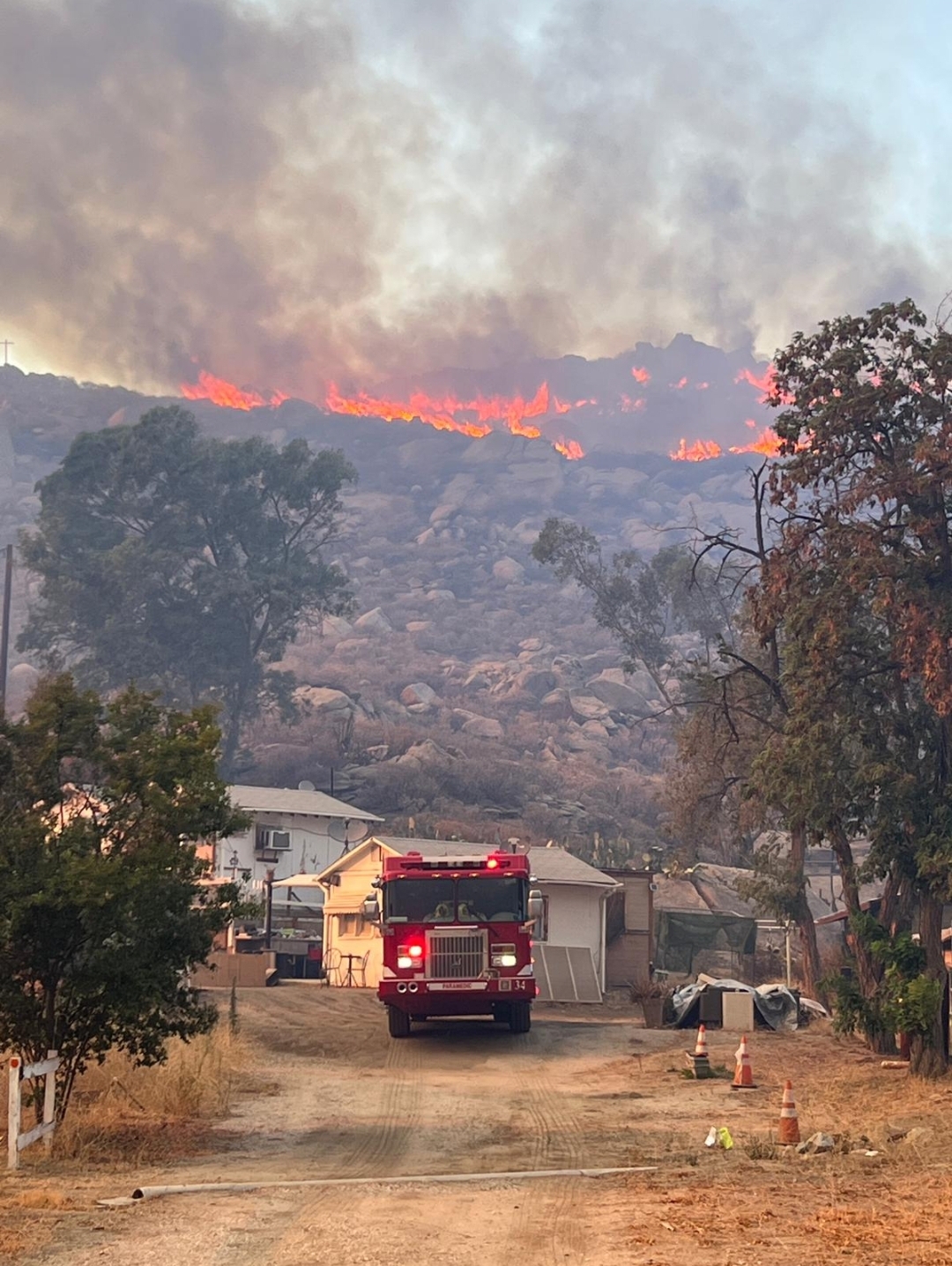 (CNS) – A helicopter being used to help fight the Fairview Fire crashed Saturday afternoon at the Banning Airport, injuring three people on board.

The pilot and two fire personnel suffered moderate injuries and were taken to a trauma center for treatment, authorities said.

Meanwhile, rain generated by the remnants of Tropical Storm Kay off the coast helped fire crews slow the spread of the deadly fire burning southeast of Hemet on Saturday, allowing authorities to reduce some of the evacuation orders from mandatory to voluntary, and allowed ground crews to reach 40% containment of the fire.

Fire officials warned, however, that the “much-need precipitation,” combined with high winds and heat can still lead to unpredictable fire behavior, so residents being allowed to return to their homes were “highly encouraged to remain alert during this dynamic incident.”

The onset of stormy weather prompted incident commanders to pull Cal Fire aircraft out of the firefighting operation late Friday morning, according to reports from the scene.

The National Weather Service had issued a flood watch and a high wind warning for the area, with authorities saying as much as 7 inches of rain could fall in the area before the storms dissipate, raising the likelihood of flash floods, mud and debris flows. The inclement weather was due to Tropical Storm Kay, which had been a hurricane before hitting the Baja peninsula in Mexico.

“Based on forecasts, this appears to be a dangerous storm,” county Emergency Management Department Director Bruce Barton said, urging motorists to take precautions and not attempt to cross flooded roads.

The Weather Service predicted gusts of 55 mph in the valleys and 75 mph in the mountains and deserts.

Sandbags are available at fire stations and hardware stores in Riverside County.

Cal Fire officials have said they hope to have the fire contained by early next week, an objective that appeared more feasible with the arrival of rain.

By 8 p.m. Friday, officials said the fire had grown to 28,307 acres, with containment increasing from the 5% that had not changed since Monday.

At 1 p.m. Thursday, Cal Fire announced that the area east of De Portola Road, west of Sage Road, north of East Benton Road and south of Diamond Valley Road was under a mandatory evacuation.

Around the same time, a new evacuation warning was posted south of Rawson Road, east of Washington Street and Anza Road, west of state Route 74 and north of Highways 79 and 371, where residents were advised to be prepared to leave should conditions change for the worse.

Other evacuation warnings were active for those living west of Reed Valley Road and west of the USFS boundary, south of Stanley and north of Wilson Valley Road.

Evacuation orders were also made voluntary for the Ramona Village community and Olivet University.

State Route 74 in the San Bernardino National Forest was fully closed between Mountain Center and Borco Street, in the Valle Vista area.

The Fairview Fire was reported shortly after 2 p.m. Monday on Fairview Avenue and Bautista Road.

The Riverside County Emergency Management Department declared a local emergency Wednesday due to the fire, enabling the county to apply for federal and state relief. The Board of Supervisors is slated to formally approve the proclamation during its meeting Tuesday. Gov. Gavin Newsom declared a state of emergency covering the fire zone earlier this week.

Officials said the fire resulted in two civilian fatalities and one civilian burn injury. Sheriff’s officials confirmed Wednesday the two deceased victims were found inside a vehicle in the 42400 block of Avery Canyon Road in East Hemet Monday, apparently overcome by the flames while trying to leave.

The two victims have not been formally identified by authorities, but friends identified them to reporters as Ian Compton and his autistic daughter Mikayla Porter. Friends said their family pets were also killed. Compton’s wife, Tina, was severely burned and remains hospitalized.

A sheriff’s official said Wednesday the woman, who was found outside the vehicle on Avery Canyon Road, is expected to survive.

According to fire officials, the wildfire has so far destroyed 17 structures and damaged four more. Friends said the Comptons’ home was among the structures destroyed.

Evacuation centers were set up at Tahquitz High School in Hemet, Temecula Valley High School and the Temecula Community Center.

The Department of Animal Services said the San Jacinto Valley Animal Campus was accepting large and small domestic creatures for safekeeping. Livestock were being cared for at the Perris Fairgrounds.

All fees for retaining pets will be waived under the county emergency order, agency spokesman John Welsh said.