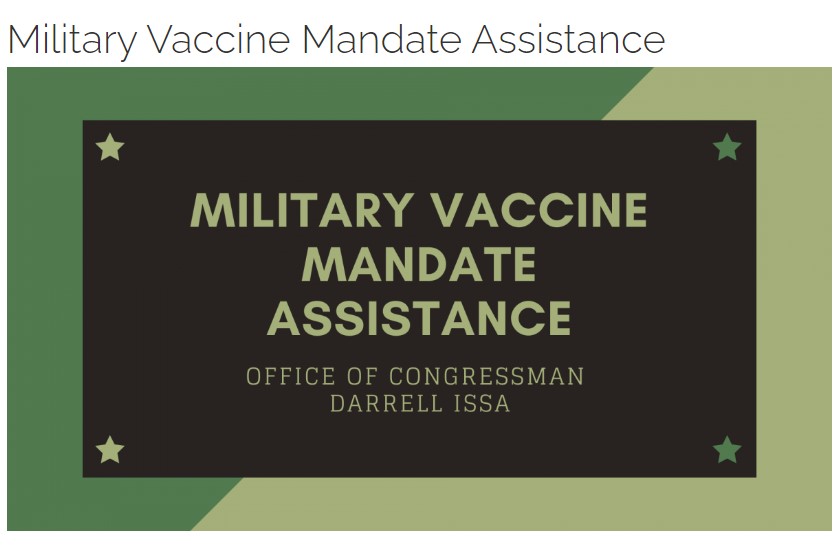 (CNS) – Rep. Darrell Issa, R-Temecula, Friday lauded the U.S. Marine Corps’ decision to lay aside its earlier requirement that all of the branch’s members receive COVID-19 therapeutics or face career-ending consequences under a military-wide vaccine mandate, but the congressman said more must be done.

“While this action is welcome relief for the hundreds of Marines fighting for the rights and careers, it is too little and too late for the hundreds of careers of service and lives of honor that are now irreparably damaged by the Biden mandate,” Issa said.

Earlier this week, the Marine Corps issued an administrative order stating that “involuntary separation” of Marines who have sought religious exemptions to vaccination will stop immediately.

The order was in response to a federal class action lawsuit filed on behalf of hundreds of Leathernecks, which culminated in a preliminary injunction in August barring termination of the plaintiffs, according to published reports.

“More than a year ago, my office began the fight to stand up for the right of religious accommodation for our service members and against the destructive mistake that is the Biden military COVID-19 vaccine mandate — which is ruining troop morale, negating force readiness and destroying the lives of our best and bravest,” Issa said.

The exact number of Marines already drummed out of the service over refusal to take the jab because of religious or personal reasons, including concerns over adverse effects, was unknown.

“The fact that this new (service) regulation was posted online with no warning or notice only confirms that this administration knows it can’t defend the indefensible to the American people,” Issa said. “Nothing ends here. The entirety of the Biden mandate must be repealed immediately.”

Federal lawsuits have been filed contesting the mandates in all service branches, including reserve and National Guard units.

Earlier this year, the U.S. Navy’s Special Warfare Command suspended a 2021 order requiring that SEALS special forces operators be vaccinated or face repercussions. A group of 35 active-duty SEALS sued in the Fifth Circuit Court of Appeals challenging the vaccine mandate on religious grounds. That suit has since been converted to a class action representing all Naval personnel who have rejected the jab.

Last year, in announcing the need for mandatory vaccinations, Army Surgeon General Lt. Gen. Scott Dingle said it was a “matter of life and death for our soldiers.”

Dingle said the coronavirus strains made “protecting the force through mandatory vaccination a health and readiness priority to the total Army,” including National Guard and reserve units.

Issa has established a web portal to assist personnel seeking exemptions. It can be found at https://issa.house.gov/military-vaccine-mandate-assistance.