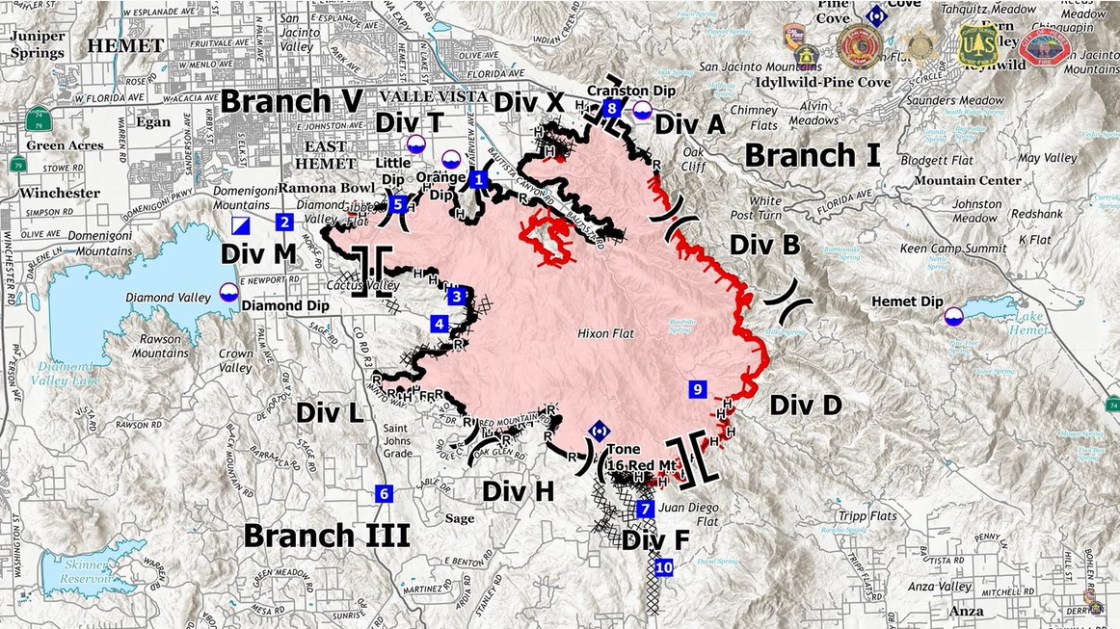 (CNS) – Firefighters were nearing full containment Sunday on the Fairview Fire, which has burned 28,307 acres since breaking out on Labor Day.

As of Sunday afternoon, containment was at 98% and all evacuations and evacuation warnings were lifted. No fire growth is expected.

The evacuation center at Redlands East Valley High School remained open for individuals who were impacted by possible debris flows.

The fire was reported around 2 p.m. on Sept. 5 on Fairview Avenue and Bautista Road. It has caused two deaths and destroyed at least 36 structures, according to the unified command fighting the fire. Two first responders were reported injured and eight additional structures were reported damaged by the fire.

Officials have set up a recovery call center to assist residents who had their homes damaged or destroyed in the fire. The number is 951-358-5134 and is staffed weekdays from 8 a.m. to 5 p.m.

Two civilians were killed and one was severely burned early in the fire. Sheriff’s officials confirmed that the two deceased victims were found inside a vehicle in the 42400 block of Avery Canyon Road in East Hemet Sept. 5, apparently overcome by the flames while trying to leave.

The two victims were not formally identified by authorities, but friends identified them to reporters as Ian Compton and his daughter Mikayla Porter, who had autism. Friends said their family pets were also killed. Compton’s wife, Tina, was severely burned and remains hospitalized. A sheriff’s official said last week that the woman, who was found outside the vehicle on Avery Canyon Road, was expected to survive.

The Riverside County Emergency Management Department declared a local emergency due to the fire, enabling the county to apply for federal and state relief. Gov. Gavin Newsom also declared a state of emergency covering the fire zone.

The cause of the fire was still under investigation. In a document filed with the California Public Utilities Commission, Southern California Edison reported “circuit activity” in the area close to the time the fire erupted.