Man Behind Bars for Alleged Burglary Pursuit in Palm Springs 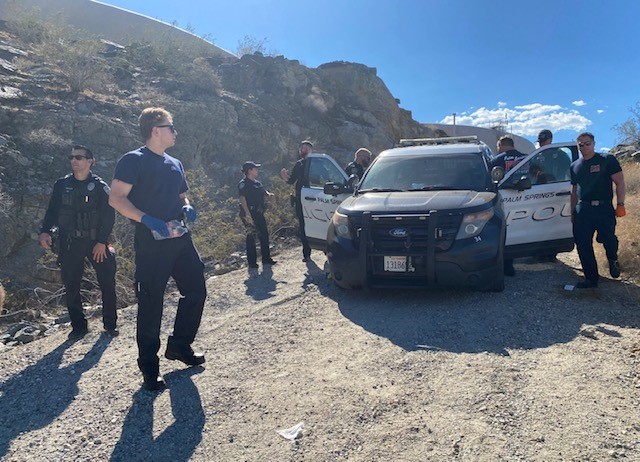 (CNS) – A 31-year-old man was behind bars Tuesday for allegedly leading police on a lengthy foot pursuit that went through a grocery store roof and onto a hiking trail in Palm Springs.

Julian Baez was arrested Monday afternoon on suspicion of residential burglary and resisting an officer, according to the Palm Springs Police Department.

According to police, at 11:30 a.m. Monday, a homeowner reported a possible burglary after receiving a security camera alert of a man going in and out of a vacant rental property in the 2100 block of Bob O Link Lane.

When officers arrived, they saw a man and woman running away, police said. The unidentified woman was arrested in the backyard of the property, but the man ran toward the Vons store at the Rimrock Shopping Center at 4733 E. Palm Canyon Drive, police said.

Baez allegedly climbed to the roof of the grocery store, and nearby construction workers used a lift to help officers get on the roof and continue the chase, police said.

Customers were evacuated from the store as officers searched crawl spaces and the attic, but Baez eluded the search and made his way on foot toward a hillside trail and RV park, according to police. A California Highway Patrol fixed-wing aircraft and the Riverside County sheriff’s office helicopter crew helped to locate Baez as he tried to climb a steep hill.

Baez allegedly threw rocks and boulders at pursuing officers as he climbed the hill, but he was arrested around 2:40 p.m. after trying to hide in a crevice, police said.

He was checked at a hospital, but was booked into the John J. Benoit Detention Center in Indio at around 11 p.m., where he remains jailed without bail.