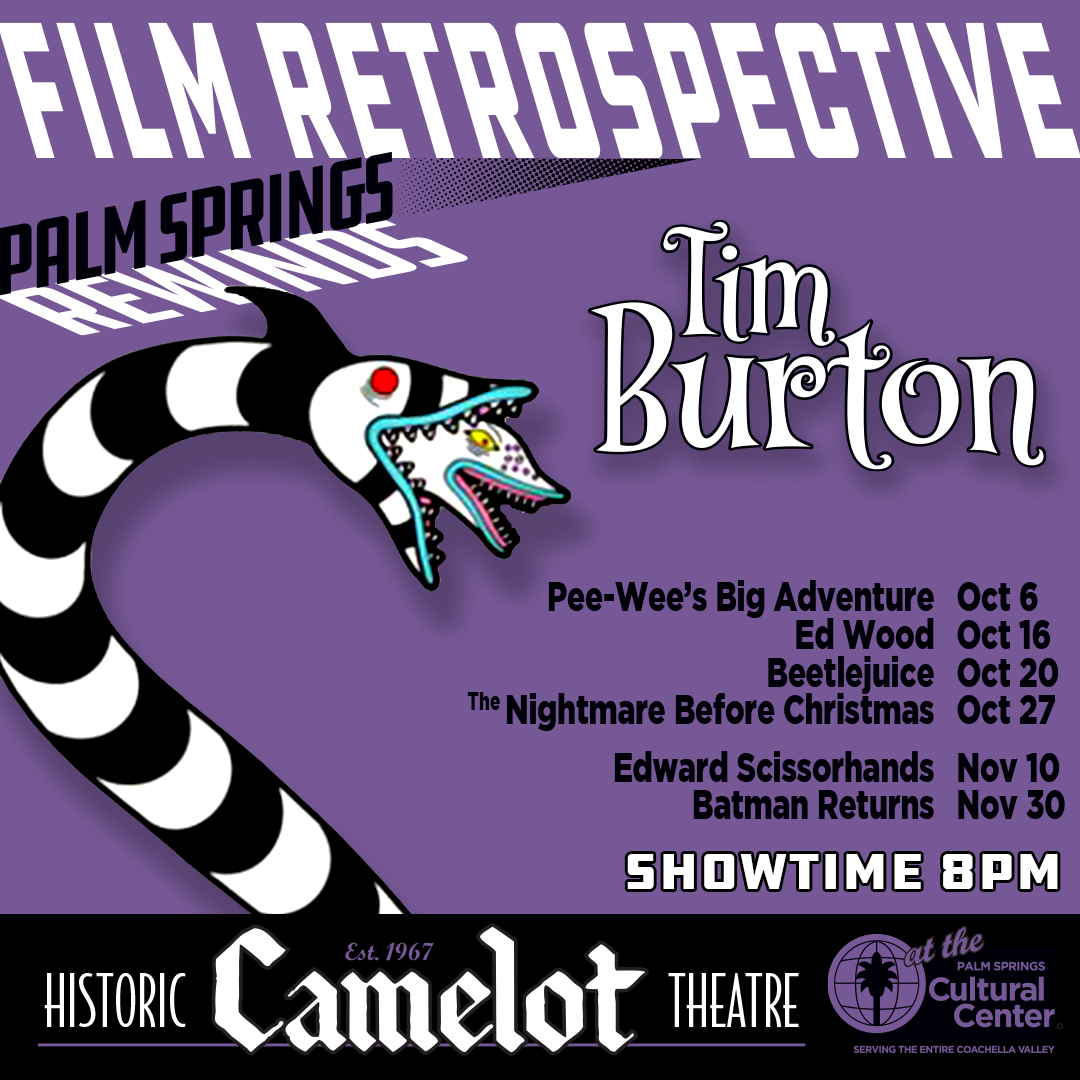 Watch the video below for our full interview with Lauren Wolfer, Program Director, of the Palm Springs Cultural Center.

The Palm Springs Rewinds: Tim Burton Retrospective is sponsored by Green Dragon Dispensary and Lounge, VR PRO USA Virtual Reality Arcade, and CV Independent. All films will be screened in the Cultural Center’s Historic Camelot Theatre. The Camelot is a local institution beloved by film fans, boasting one of the largest screens in the Coachella Valley and a state-of-the-art sound system.

Here’s the full list of Tim Burton films that are being shown:

Pee-wee Herman (Paul Reubens), an eccentric child-like man, loves his red bicycle and will not sell it to his envious neighbor, Francis (Mark Holton). While Pee-wee visits his friend Dottie (Elizabeth Daily), the bike is stolen. Thinking his bike is at the Alamo, Pee-wee sets off on a trip, where he meets many remarkable people, including waitress Simone (Diane Salinger) and a motorcycle gang. Eventually, Pee-wee discovers that his bike is being used in a movie and tries to recover it.

Because of his eccentric habits and bafflingly strange films, director Ed Wood (Johnny Depp) is a Hollywood outcast. Nevertheless, with the help of the formerly famous Bela Lugosi and a devoted cast and crew of show-business misfits who believe in Ed’s off-kilter vision, the filmmaker is able to bring his oversize dreams to cinematic life. Despite a lack of critical or commercial success, Ed and his friends manage to create an oddly endearing series of extremely low-budget films.

After Barbara (Geena Davis) and Adam Maitland (Alec Baldwin) die in a car accident, they find themselves stuck haunting their country residence, unable to leave the house. When the unbearable Deetzes (Catherine O’Hara, Jeffrey Jones) and teen daughter Lydia (Winona Ryder) buy the home, the Maitlands attempt to scare them away without success. Their efforts attract Beetlejuice (Michael Keaton), a rambunctious spirit whose “help” quickly becomes dangerous for the Maitlands and innocent Lydia.

The Nightmare Before Christmas is a stop-motion animated musical dark fantasy film directed by Henry Selick and produced and conceived by Tim Burton.Tired of scaring humans every October 31 with the same old bag of tricks, Jack Skellington, the spindly king of Halloween Town, kidnaps Santa Claus and plans to deliver shrunken heads and other ghoulish gifts to children on Christmas morning. But as Christmas approaches, Jack’s rag-doll girlfriend, Sally, tries to foil his misguided plans.

A scientist (Vincent Price) builds an animated human being — the gentle Edward (Johnny Depp). The scientist dies before he can finish assembling Edward, though, leaving the young man with a freakish appearance accentuated by the scissor blades he has instead of hands. Loving suburban saleswoman Peg (Dianne Wiest) discovers Edward and takes him home, where he falls for Peg’s teen daughter (Winona Ryder). However, despite his kindness and artistic talent, Edward’s hands make him an outcast.

The monstrous Penguin (Danny DeVito), who lives in the sewers beneath Gotham, joins up with wicked shock-headed businessman Max Shreck (Christopher Walken) to topple the Batman (Michael Keaton) once and for all. But when Shreck’s timid assistant, Selina Kyle (Michelle Pfeiffer), finds out, and Shreck tries to kill her, she is transformed into the sexy Catwoman. She teams up with the Penguin and Shreck to destroy Batman, but sparks fly unexpectedly when she confronts the caped crusader.