Board Considers Extending Moratorium on Rentals in Idyllwild, Temecula Valley 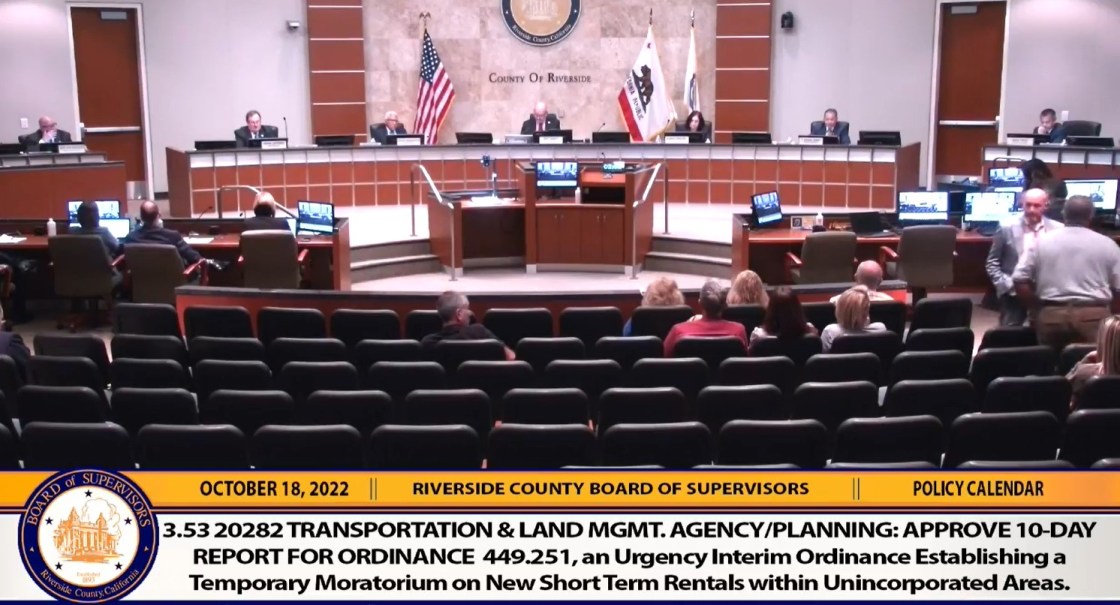 (CNS) – The Riverside County Board of Supervisors Tuesday scheduled a public hearing for Oct. 25 to consider whether to extend a moratorium on the issuance of new short-term rental permits in the unincorporated Temecula Valley, as well as the mountain communities around Idyllwild.

“These are unique communities that have been inundated with short- term rentals,” Supervisor Chuck Washington, whose Third District encompasses the locations, said. “We need to give special consideration, so we can come up with a `carve-out,’ so to speak, in the regulations. The moratorium is not an attempt to shut people down, but it is an attempt to define how inundated they are.”

The board first approved the moratorium on Sept. 13 for a 45-day period. The pause ends in the last week of October. The next option is a 10- month extension, on which the board will vote next week.

The Transportation & Land Management Agency provided the supervisors with a report Tuesday indicating that many residents in the mountain communities and the Temecula Valley favor restrictions on short-term rental permits, based on informal surveys taken during two community meetings earlier this month.

“The analytics (in the report) are … very biased, very negative,” Thomas DeCarlo, a short-term rental property owner, complained to the board. “Don’t continue this moratorium. Let this thing see itself through.”

Roy Holyfield, another speaker, said a moratorium extension would be “unfair to people who are in limbo” on completing real estate transactions because of it.

Others favored a continuation.

“We maxed out on short-term rentals probably two years ago,” Idyllwild resident Joel Feingold said. “People deserve peace and quiet. We have enough (rentals). Put a cap in place.”

The TLMA report showed that 27% of community members who participated in the Temecula Valley survey were content with countywide regulations being applied before other actions are taken to specifically address permitting in the Wine Country area. But they were followed closely by a sizable number — 22% — supporting an outright ban on additional permits.

The highest number tracked in the Idyllwild-Pine Cove survey — 33% — signaled a desire for a 10% cap on short-term rentals in the mountain communities. The next closest number — 21% — favored a stipulation that the county consider housing availability in the area before implementing any new regulations.

Prior to setting the public hearing on the moratorium extension, the board approved a series of changes to the county’s Short-Term Rental Ordinance, No. 927, which generally applies to all unincorporated communities. If the moratorium is not extended on Oct. 25, the ordinance would apply to the mountain communities and the Temecula Valley.

TLMA officials told the board last month that applications for rental certificates had surged over the last 13 months, leading to an average of 54 new certificates being issued every month, a disproportionately high number going to property owners in the Idyllwild-Pine Cove area and the Temecula Valley.

“If the increase continues, adverse impacts that have the potential to endanger the health and safety of residents, guests and the very environment and resources that attract visitors to the county will increase,” according to a TLMA statement.

Officials noted that a high concentration of short-term rental properties could prove problematic in the Temecula Valley Wine Country, undermining “the character of the community.”

Similar concerns were raised regarding the Idyllwild area, where 12% of the 1,100 licensed short-term rentals in unincorporated communities are now located, according to the TLMA.

“The greater the number of short-term rentals in a neighborhood, the greater the potential impacts on the neighborhood,” the agency stated. “The infrastructure in this area remains rural in nature, exhibiting narrow, steep roads and a lack of shoulder parking.”

Short-term rentals are defined as residential dwellings leased for a maximum of 30 days and a minimum of two days and one night.