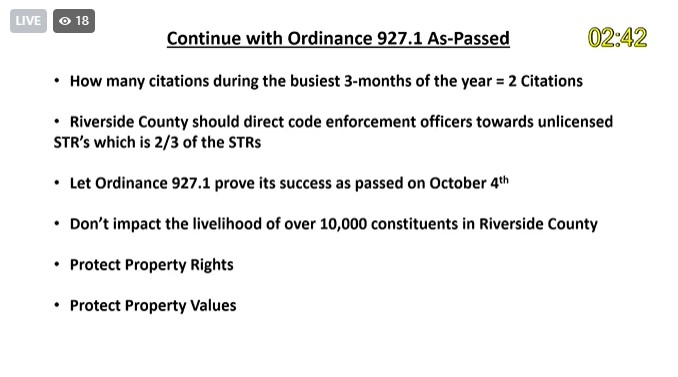 (CNS) – The Board of Supervisors Tuesday formally adopted new regulations for short-term rental properties in unincorporated areas of Riverside County, establishing fees, occupancy limitations and other requirements for owners to obtain and retain permits.

“We’re moving in the right direction, taking steps we need,” Supervisor Chuck Washington said ahead of the 5-0 vote in favor of the overhauled Short-Term Rental Ordinance, No. 927. “(My) Third District has a good chunk of short-term rentals in the county, and 90% are run by people who are … neighborly. My priority is peace and quiet for neighborhoods.”

(CNS) – The Board of Supervisors is slated Tuesday to formally adopt new regulations for short-term rental properties in unincorporated areas of Riverside County, establishing fees, occupancy limitations and other requirements for owners to obtain and retain permits.

The board has held three prior hearings to consider the overhauled Short-Term Rental Ordinance, No. 927 and was set to adopt the revised framework on Oct. 4, but the addition of several minor modifications pushed adoption to now.

Acreage above that amount would mean up to 20 people could stay in a short-term rental in a given period, under the proposed regulations.

The Transportation & Land Management Agency had previously inserted a regulation that caused numerous property owners concern, leaving open the possibility that residences in higher tiers might have to install fire sprinkler systems costing between $30,000 and $100,000 in order to receive a yearlong short-term rental permit.

“That’s a recommendation for whoever can afford it because that would involve a major remodel to a home,” Jeffries said.

Sprinklers are only recommended under the proposed regulatory regime.

The board agreed to keep a provision for outdoor noise monitors, which would have to be installed to ensure disturbances are minimized. The county’s “quiet time” rules, specifying no loud noises between 10 p.m. and 7 a.m., would additionally need to be observed.

The revised ordinance would mandate that a “responsible operator” be designated before a short-term rental certificate is issued by the Department of Planning. The operator could be the owner of a property, or someone selected by the owner to act as his or her representative.

Rentals would also need to have a “responsible person” on-site during the time the property is leased.

Units defined as short-term rentals would provide temporary living space for a maximum of 30 days, but not less than two days and one night, according to the proposed revisions. The properties would be subject to a 10% transient occupancy tax, much the same as hotels and motels.

The application fee to establish a short-term venue would be $740, and annual renewals would run $540.

The revised ordinance would mandate that an operator respond within 60 minutes to complaints or emergencies; otherwise, he or she might be subject to civil penalties, and the short-term rental certificate could be revoked.

The county has already established a “special enforcement team” of code enforcement officers dedicated to policing “party house” complaints on weekends and during nighttime hours.

Noise, health and other violations could result in citations of between $1,500 and $5,000, depending on the circumstances.

In February, the board approved a $346,240 contract with San Diego- based Deckard Technologies Inc. to manage the registration of short-term rentals, keep track of tax payments and handle the production and distribution of brochures for operators.

Ordinance No. 927 was originally approved in January 2016, establishing basic criteria by which short-term rental property owners and agents are supposed to abide.

It was in direct response to “adverse impacts to surrounding neighbors and properties (from) unpermitted large-scale events, excessive noise, disorderly conduct, traffic congestion … and accumulation of refuse.”

Officials said there are roughly 1,100 registered short-term rental businesses in unincorporated communities, but they believe the unregistered number could be three times that amount.