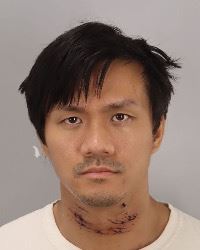 (CNS) – A man accused of stabbing his wife and another man in what authorities called a domestic violence confrontation at a Palm Desert hotel parking lot must stand trial on two counts of murder, a judge ruled Friday.

Kenny Shun Yu Wu, 34, of Palm Desert, was arrested July 17 and was being held at the John J. Benoit Detention Center in Indio without bail.

He’s accused in the murder of his wife Yaying Wu, 31, also of Palm Desert, and Jesus Sanchez, 30, of Cathedral City. The victims were pronounced dead in the parking lot where they were found by deputies from the sheriff’s Palm Desert station on July 15 outside the SpringHill Suites hotel in the 72300 block of Highway 111.

Kenny was found alive with blunt force trauma to his body and taken to a hospital. He was treated for critical injuries, then was released and arrested two days later.

At the end of a preliminary hearing Friday, Riverside County Superior Court Judge Valerie Navarro found there was sufficient evidence to warrant a trial on the two counts of murder.

The judge scheduled a post-preliminary hearing arraignment for Nov. 4.

During the preliminary hearing, Sheriff’s Deputy Jackson Wu (who has no relation to the victims or suspect) testified about a translated interview with Yaying’s mother, Xuexiu Jia, from the day of the fatal incident.

According to Deputy Wu, Jia said Kenny and Yaying were having marriage problems because of Yaying’s relationship with another person, and there were multiple incidences in which Kenny was violent toward his wife.

Jia said that Kenny always said that he wanted to kill them, and that the night before the fatal incident, Kenny was “acting so crazy as though he was having a psychotic episode,” according to Deputy Wu.

Anyone with information about the case was asked to call the Palm Desert sheriff’s station’s Investigation Bureau at 760-836-1600 or Investigator Munoz with the Central Homicide Unit at 951-955-2777.